Responding to the outrage, the Premier said she was not aware that her mask had fallen off. Minister of Police Bheki Cele has called for an investigation into Mpumalanga Premier Refilwe Mtsweni-Tsipane’s conduct at Jackson Mthembu’s funeral.

The Premier was seen on national TV not wearing a mask in public, causing an uproar among South Africans, who criticised her for not adhering to Covid-19 regulations.

Mtsweni-Tsipane caused an uproar for not wearing a mask at Jackson Mthembu’s funeral on Sunday. 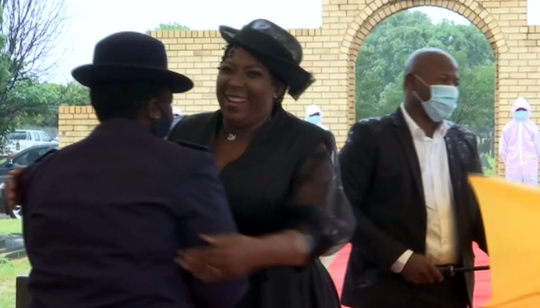 Mthembu died on Thursday from Covid-19 complications and was laid to rest in his hometown of Emalahleni in Mpumalanga on Sunday.

Mtsweni-Tsipane, along with other ANC leaders, attended the funeral. However, she has been highly criticised for not wearing a mask.

While the premier wore a mask inside the hall, where she paid tribute to Mthembu, video footage shows her not wearing her mask outside.

In a statement, Cele said the wearing of masks in public was a non-negotiable.

“If South Africa wants to beat this invisible enemy which is COVID-19, we simply can’t let down our guard down. This is why I have spoken to the National Commisioner of the South African Police Service, General Khehla Sitole to look into the matter of the Premier and an investigation must be conducted and necessary action must be taken.”

“General Cele would like to remind all South Africans that the wearing of a mask in public is mandatory for every person, under the adjusted alert Level 3 Lockdown regulations.

“Any person who fails to comply with a verbal instruction by a law enforcement officer, to wear a mask, commits an offence, and is, upon conviction, liable to a fine or a period of imprisonment, not exceeding six months or both,” said the minister.

RELATED: Mpumalanga Premier says she was not aware her mask had fallen off

Responding to the outrage, the Premier said she was not aware that her mask had fallen off. She has apologised for the incident, and further called on people to adhere to Covid-19 regulations.

However, her apologised has angered South Africans even more.

I’m still analysing that statement from the Mpumalanga premier… pic.twitter.com/aPY4CwGT1I