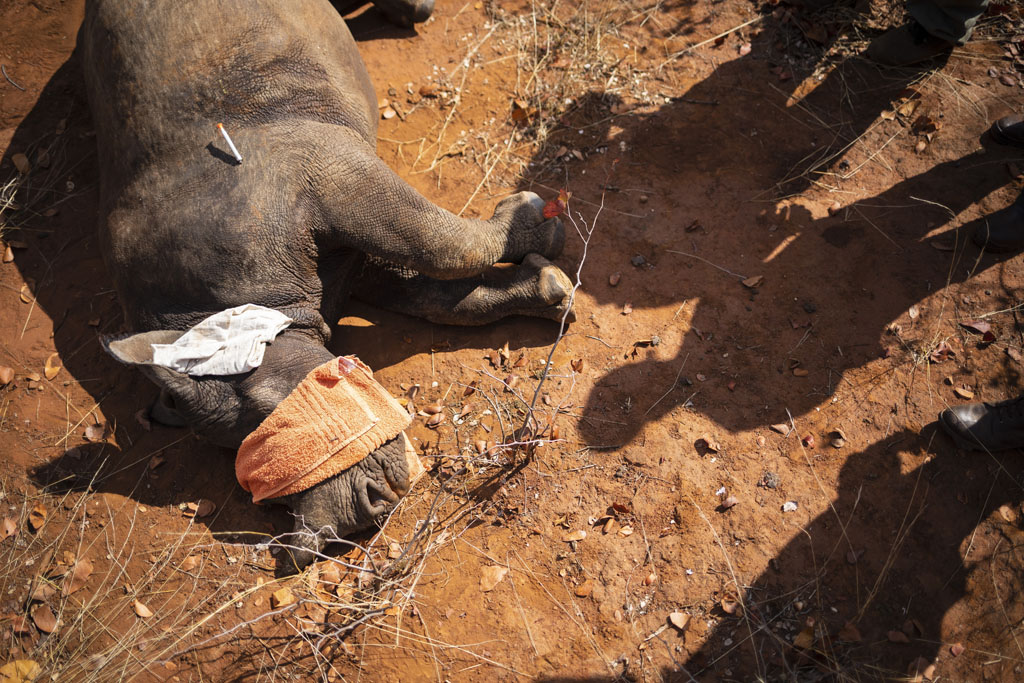 Darted black rhino calf, Leto, lies tranquilized in the ground near her mother during the dehorning of all the black rhinos on an unnamed private game reserve near the Kruger National Park, 08 September 2020. Picture: EPA-EFE/KIM LUDBROOK

A new report from SANParks has shown that there has been a significant decrease in rhino poaching in 2020 due to nationwide Covid-19 lockdowns.

The report released on Monday revealed that last year, 394 rhino were poached for their horns in South Africa. This is 33% fewer than the 594 killed in 2019.

According to SANParks during the various lockdown alert levels last year, the movement of poachers and rhino horn smugglers had been curtailed.

“After ten years of implementing various strategies to combat rhino poaching by local poachers who are recruited and managed by crime syndicates, South Africa has managed to arrest the escalation of rhino losses and has now seen a year on year reduction in the number of poached rhinos.

“Whilst this success should be celebrated as a moderate win, we cannot become complacent as the escalating demand in consumer countries ensures a lucrative black market trade and thus relentless pressure on all resources to combat this organised crime,” it said.

During 2020, 247 rhino were poached for their horns in South African National Parks, 245 in the Kruger National Park, and two in Marakele National Park in Limpopo.

As a result of the Covid-19 hard lockdown, SANParks reported a significant reduction in poacher incursions into the Kruger National Park.

However, that changed later in the year as the lockdown levels eased and a significant spike in poaching in the Kruger National Park was experienced towards the end of last year, especially during December.

From January to December last year, 66 alleged poachers were arrested within the Kruger National Park.

A total of 90 people were arrested for rhino poaching and rhino horn trafficking outside the Kruger National Park, and more than 25 major investigations were undertaken across the country.

Environment, Forestry and Fisheries Minister Barbara Creecy said: “While the extraordinary circumstances surrounding the battle to beat the Covid-19 pandemic contributed in part to the decrease in rhino poaching in 2020, the role of rangers and security personnel who remained at their posts, and the additional steps taken by the government to effectively deal with these and related offences, also played a significant role.”

The DA has called on SANParks to present a comprehensive briefing to Parliament on the state of South Africa’s dwindling rhino population.

DA spokesperson Dave Bryant said: “SANParks have repeatedly stated that rhino poaching is declining but this is clearly not the case and in complete contradiction with what we have been hearing from people on the ground.

“Tourists and locals have consistently been reporting very low rhino numbers. These sentiments have been confirmed in chilling detail by the official numbers.

“It is now patently clear that the only reason that SANParks claims that poaching of rhino has decreased is because poachers are simply struggling to actually find more rhinos to poach.”