Many farmers have outsourced the planting of their crops and grazing of cattle to areas where water was more plentiful. 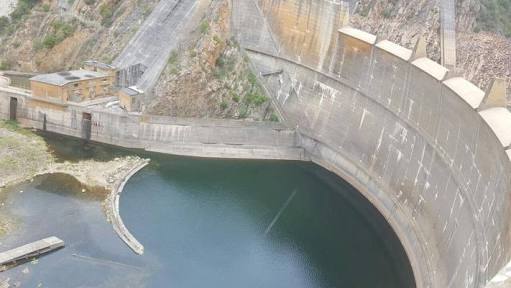 Despite the floods in the north of South Africa, farmers to the south are grappling with an unprecedented crisis as one of the Eastern Cape’s largest dams, the Kouga Dam, looks set to run dry
for the first time ever.

With the dam level dropping below 7%, the Gamtoos Irrigation Board (GIB) has warned it cannot supply water adequately below the 3% water mark. The dam, which opened in 1969 and last overflowed in 2015, has never dropped below the 6.5% mark.

Known for its citrus, cash crop and dairy farming, the Gamtoos River Valley is buckling under a years-long drought. Due to dwindling reserves, the 132 agricultural water users who rely on the dam
for irrigation have been able to draw just 20% of their annual water quota since last July.

“The lowest release level of the dam is 3.1%,” said Rienette Colesky, CEO of the irrigation board.

“We will, however, not be able to sustainably supply water at that level.”

Colesky said the Nelson Mandela Bay and Kouga municipalities’ drawings from the dam were
curbed to just 30% and 70% of their full allocations.

“This situation endangers the citrus harvest for many farmers who might not be able to water their crops further and who do not have access to alternative sources, such as boreholes.”

ALSO READ: Gamtoos Valley farmers now pray for a flood to save them

Even when farmers drilled boreholes, that water quality was not always suitable for agricultural use, she added.

“The situation was already dire for our cash crop and dairy farmers from the start of the water year, as a 20% availability of their full water allocations has had a devastating effect on the planting of cash crops and watering of pastures for dairy farming.”

Many farmers have outsourced the planting of their crops and grazing of cattle to areas where water was more plentiful.

Tertius Meyer, cattle and citrus farmer in the valley, said some farmers had already used up their water allocations for the 2020/21 water year, which ends in June, leading to their supply from the dam being discontinued.

“Some farmers are helping their neighbours with water. Some are spending a fortune bringing in water in tankers just to keep their orchards alive,” said Meyer.

“One can see the condition of the cattle worsening, as there is very little food for them, forcing farmers to either sell off their livestock or rent grazing in areas with water and move their herds. The trees are dry. The fruit size will be affected, which means there will be an abundance of smaller fruit this season.”

Fellow farmer in the valley Khaya Katoo has drilled boreholes.

“The dam water is not enough at the moment,” he said.“Our quota will be used up very soon, but we have fruit which needs harvesting. That’s a worry, as it’s hot and the trees need a lot of water. We have reduced our irrigation scheduling to ensure the youngest trees get enough water and survive,” said Katoo, who has cut back on water usage by 30%.

Noel le Roux and his brother provide fresh produce for leading retailers nationwide. Le Roux said
the scarcity of irrigation water meant they had had to use their reduced water quota “to keep the
citrus going because it’s a permanent crop”, making up 40% of the business.