Five things you need to know about the Cape Town fires

Even though at least 90% of the blaze has been contained, the risk of a resurgence is still significant, authorities warned. Hundreds of hectares of land destroyed, a number of gutted buildings and displaced residents, students and animals are the end result of Cape Town’s devastating fires which ignited at the weekend.

Even though at least 90% of the blaze has been contained, the risk of a resurgence is still significant, said Anton Bredell, Western Cape local government, environmental affairs and development planning MEC. 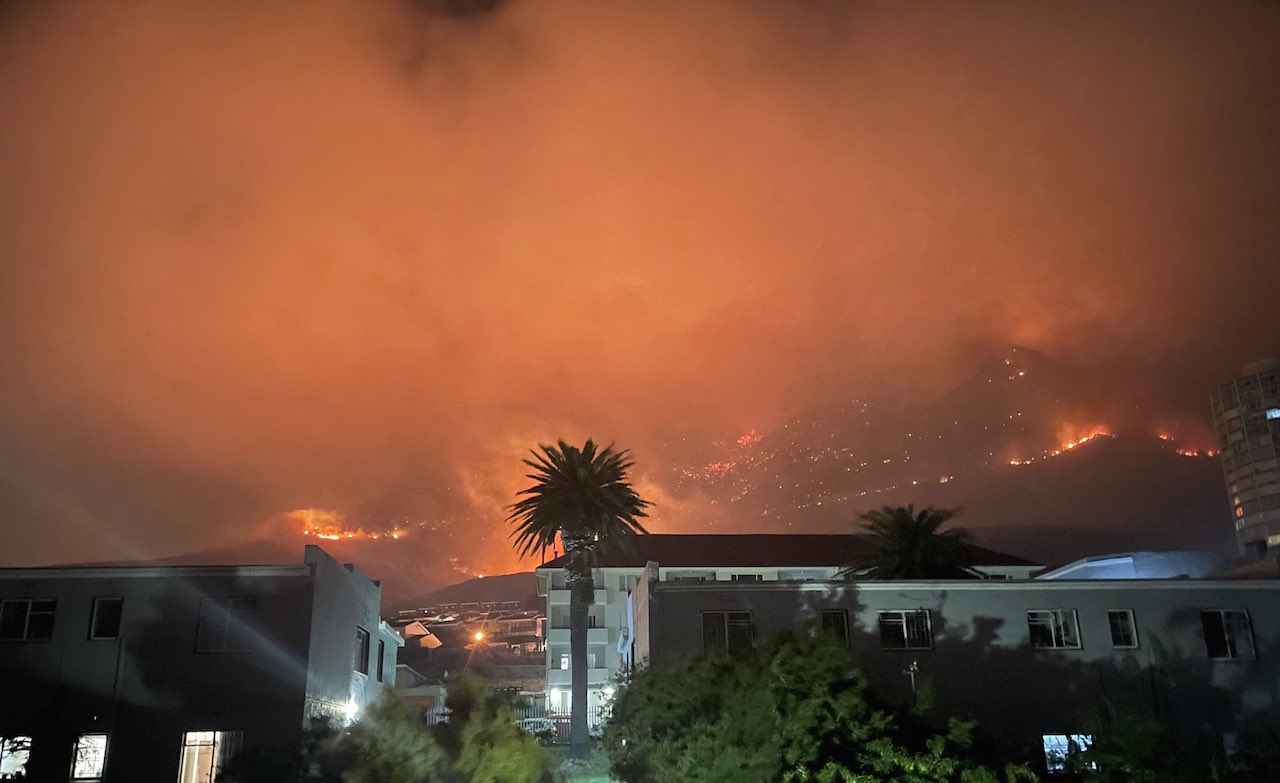 “Our first priority remains fully extinguishing all of the fire lines. Then over the next few days, firefighters will continue to dampen down the affected areas and monitor for flareups until we are 100% sure the fire is out,” he said.

“Damage assessments will be done as well and once the fire has been extinguished the investigation into the cause of the fire will be conducted.”

Two houses in the Rosebank area were destroyed, as well as six education buildings on the University of Cape Town’s (UCT) upper campus. A firefighter battles a blaze that destroyed the nearly 200-year-old Jagger Library on the University of Cape Town (UCT) campus in Cape Town on 18 April 2021. Picture: EPA-EFE/NIC BOTHMA What remains of Mostert’s Mill. Photo: Facebook/Friends of Rhodes Memorial

Phakeng said the collection included more than 85,000 items on African studies alon, and that the African film collection was among the most extensive in the world, containing more than 3,000 films for viewing and research.

All academic activities have been suspended until Friday. Mopping up operations are also under way at UCT. UCT said around 4,000 students were evacuated from their residences on campus on Sunday and placed in temporary accommodation across the city.

It is not yet clear how many residents surrounding the Devil’s Peak area where the fire broke out were affected, but at least nine were taken to hospital for smoke inhalation.

Six firefighters were injured in the line of duty. Western Cape public safety MMC JP Smith told The Citizen only a handful of residents had to leave their homes, with one or two angry citizens lashing out at disaster management staff.

However, the fire’s impact on traffic was much worse due to road closures going into the CBD.

He said this inconvenience runs into the tens of thousands, with many essential delivery vehicles and ambulances caught in the traffic chaos.

“I hope the person who started the fire appreciates the knock-on effects, three days later.”

Since Sunday, the Cape of Good Hope SPCA dispatched inspectors to look for any injured or displaced animals affected by the fire.

People evacuating their animals were also able to surrender their animals to be housed safely until the fires abated and they could return home.

In a statement on Tuesday, the team confirmed they were looking for first signs of life.

Some areas are still smouldering, melting the soles off inspectors’ feet.

They have asked residents to keep shallow containers of water in their gardens and to call the SPCA should they find any displaced wild animals or animals in distress.

There are around 1,500 plant species found on Table Mountain alone.

There are also a host of rare frogs, tortoises, snakes, lizards and birds.

TMNP media relations officer Babalwa Dlangamandla was not yet able to confirm what species of plants and animals were affected by the fires.

Smith said it is thought the UCT fire and the blaze at Mostert’s Mill was started by thermals hoisting embers into the air and dumping them to earth.

However, he said fire forensic investigators will have to scrutinise everything from first respondent testimonies to photos and videos taken during the fire.

This is especially because it is not yet clear how the fire spread so rapidly, considering it was not very windy on Sunday, Smith said. Plumes of smoke are seen over Philip Kgosana Drive towards Rhodes Memorial and UCT on April 18, 2021. Picture: Ziyaad Douglas/Gallo Images)

Where is the fire now?

Working on Fire said three helicopters had been deployed with efforts focussed on Deer Park and Disa Towers.

Earlier on Tuesday, Working on Fire said the fire was making its way towards the cableway.

Dlangamandla said the fire was successfully contained at 1.30pm and a more detailed statement would follow.