Zikalala was caught on video beating up a young man Wednesday during his visit to Riverhorse Valley, north of Durban. 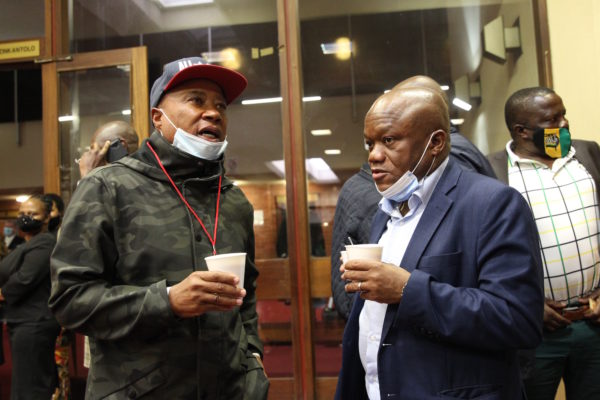 Among those who came to give support to former president Jacob Zuma is KwaZulu Natal Premier Sihle Zikalala and the ANC's Tony Yengeni. Picture: Doctor Ngcobo/African News Agency/Pool

KwaZulu-Natal Premier Sihle Zikalala has apologised for assaulting a young man believed to be linked to a looting incident in Phoenix.

Zikalala was caught on video beating up a young man Wednesday during his visit to Riverhorse Valley, north of Durban, where hundreds of looters had been targeting businesses.

He was accompanied by a delegation when he visited the worst affected areas as part of assessing the damage on the ground.

He has since come under fire for his actions, with some calling for the premier to be held accountable.

Zikalala has since apologised for the incident, saying that he regreted the “level of force used in apprehending of a looter who was attempting to make off with goods that had been stolen from a nearby warehouse”.

“While the action of apprehending a resisting looter is justified, the manner in which this was done is deeply regretted,” said Zikalala.

In a statement released by his office, it said that Zikalala believed that public violence had no place in society.

ALSO READ: Bheki Cele rears his head: Looting, lawlessness will not get worse

“The premier apologises for this incident. The premier believes that public violence has no place in society and in the same spirit those who commit acts of destruction, do not share in the values of our nation,” reads the statement.

“Once again, we call upon all the people of KwaZulu-Natal to stand united in our diversity and begin our rebuilding programme.”