‘Cowardly attack’: Gumede denies being an instigator of violent protests

At this stage, police have arrested nine of the 12 alleged masterminds behind the rampant looting and violent unrest. 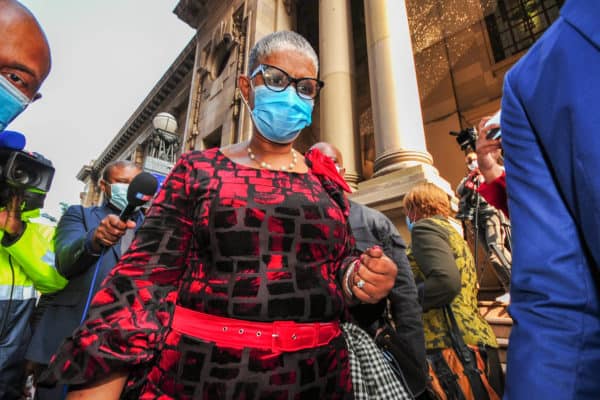 Zandile Gumede appears at the Durban High Court for pre-trial hearing on June 14, 2021 in Durban, South Africa. It is reported that the accused face charges of fraud, money laundering, and racketeering that stem from a 2017 Durban Solid Waste tender amounting to over R400 million that was issued by the eThekwini municipality in 2017 while Zandile Gumede was the mayor. (Photo by Gallo Images/Darren Stewart)

Former eThekwini mayor Zandile Gumede has dismissed claims that she is one of the instigators of the recent wave of rampant looting and violent unrest in parts of KwaZulu-Natal and Gauteng.

In a statement, Gumede, who is also an ANC MPL in the KwaZulu-Natal legislature, labelled the allegations as a “cowardly attack on my personal and political integrity”.

“It is of some concern that certain individuals and persons with political aspirations and a political agenda against myself and those supporting me, have engaged in an unnecessary and cowardly attack on my personal and political integrity, through media statements and various post on certain social media platforms,” she said.

Gumede indicated that she has since laid a case of crimen injuria at the Mtshebheni police station in Inanda, KwaZulu-Natal.

“I have laid a formal complaint at Mtshebheni police station, on Monday, to investigate the malicious allegations which are putting my life and that of my family under security threat,” she said.

She said those behind the accusations appeared to be pushing an agenda of division within the ANC and among the citizens of eThekwini region.

“Through spurious and malicious allegations that I am in some way associated with and or among the instigators of recent unrest in KwaZulu-Natal and Gauteng.

“I deny in the strongest terms and with the contempt that such spurious and unsubstantiated allegations deserve. It is noteworthy that there are no individuals or organized groupings that have had the courage to accept the responsibility for these irresponsible statements and social media posts,” she added.

At this stage, the South African Police Service (SAPS) has arrested nine of the 12 alleged masterminds – including former Ukhozi FM DJ Ngizwe Mchunu and Patriotic Alliance leader Bruce Nimmerhoudt – behind the riots and destruction of property that were sparked by former president Jacob Zuma’s incarceration.

While more arrests are expected, one of the alleged instigators has since been granted bail.

According to Daily Maverick, the instigators used WhatsApp and Telegram in order to carry out their strategic planned attacks.