The video started an uproar among netizens, with one user saying they were 'disgusted'. 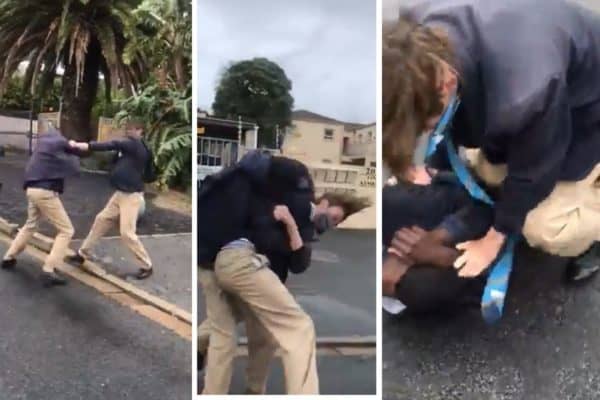 A video – reportedly filmed at Table View High School in Cape Town – is doing the rounds on social media and dividing users as they speculate over the cause of the fight.

The video started an uproar among netizens, with one user saying they were “disgusted with the violent incident that happened at Table View High”.

“The black learner is at home peeing blood from the injuries yet the white boy is attending classes like nothing happened. White privilege always prevails.”

Another Twitter user said the “white boy stole the black boy’s phone; when he demanded his phone they waited for him after school and beat him”.

“The white boy is in school while the black boy is home suffering from his injuries.”

Other netizens disagreed, with one user saying: “I mean it’s disgusting, but from what I can see it’s just two school kids fighting. One happens to be white and the other black.”

Another said it seems like a “fair fight”, it was “just unfortunate the black boy lost the fight”.

“This boy needs to learn self-defence. It’s one on one, they are not ganging up on him.”

One netizen said: “These kids were fighting. They were all wrong. There was no need for mentioning ‘black’ and ‘white’ because this is not about racism.”

We reached out to the school for comment and was referred to the Western Cape education department’s communication director, Bronagh Hammond, whose number was unreachable at the time of publishing.

Update: Hammond said on Wednesday a group of pupils are facing disciplinary action after assaulting a black learner. She said the fight broke out “over a packet of chips”.

The boy who was assaulted in the video intervened to stop the altercation. She said trauma counselling has been arranged for the bullied eviction.

Social media user Nande Dyantyi said the “fight started on the school premises when the black learner reported his phone stolen. The teachers investigated and found the cover of the phone inside the blazer of the white boy”.

Dyanti said, “the school failed to investigate and the black boy got a beating for it.”

Why didnt u untervene instead of taking a video?Things will change when you decide to act differenly
….Tweeting is good but it a belated action.Intervene while things are happening— Willie Chaka (@achakabwata) August 2, 2021

Back in November 2020, Table View High School distanced itself from the racist TikTok account of a 15-year-old pupil.

The department at the time “engaged with the school and has confirmed that the learner’s account has allegedly been impersonated”.

The pupil’s parents submitted the teen’s phone to the police and have opened a case of defamation of character.

Whose corruption is worse? Zuma or Ramaphosa?
50 mins ago
50 mins ago

'The city is poorer without him': Tributes pour in for Joburg mayor Jolidee Matongo
1 day ago
1 day ago

Whose corruption is worse? Zuma or Ramaphosa?
50 mins ago
50 mins ago

'The city is poorer without him': Tributes pour in for Joburg mayor Jolidee Matongo
1 day ago
1 day ago