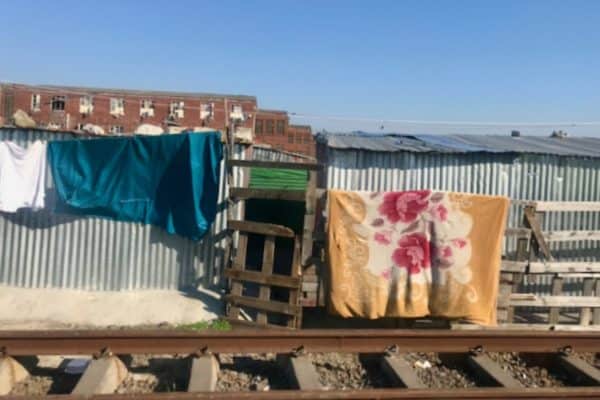 The Western Cape High Court has ordered that families living on PRASA land on the railway line in Langa be evicted and relocated. Photo: GroundUp/Tariro Washinyira

Families living on the Prasa railway line in Langa are to be evicted to two pieces of land in Eerste River and Stellenbosch, where the Housing Development Agency (HDA) intends to build about 2,550 emergency housing units “to clear the railway route and allow it to be operational”.

The informal settlement is preventing Metrorail from reopening the Central Line beyond Langa.

This follows from an eviction application by the Passenger Rail Agency of South Africa (Prasa). The Western Cape High Court granted an order on 30 July for the families in the Siyahlala informal settlement to be moved and housed.

Acting Judge Alma de Wet ordered that the families be moved by 26 November. She said they must be allowed to visit the new land before then, at the latest four weeks before the relocation.

Those who did not want to settle on the new land would in any case have to quit the PRASA land and could be forcibly removed. The South African Police would assist the sheriff with the relocation process.

She ordered that the new site must provide basic services as required by the Constitution and that the housing must comply with the standard operating procedure of the Housing Development Agency.

The relocation process was structured in a way that allows children to continue with school, Judge de Wet said. The families would be moved after the end of the school year and parents would have time to enrol their children in new schools.

PRASA board chairperson Leonard Ramatlakane said criminals had stolen cables taking advantage of the lockdown when Covid-19 gripped the country. In the meantime, the rail tracks at Langa station had been illegally occupied, he said.

ALSO READ: Prasa jobs on the line as rail operations are reviewed

The Siyahlala settlement was established in 2016 on PRASA land and then expanded towards the train station.

Ramatlakane said PRASA had started talking to the occupiers in January and February to urge them to vacate the land. “They wanted a guarantee that land would be made available which we couldn’t do as PRASA. We ended up in the High Court in Cape Town.”

Department of Public Works and Infrastructure (DPWI) spokesperson Zara Nicholson told GroundUp the department had identified land and was conducting a feasibility study and valuation. Subject to National Treasury approval, the land would be transferred to the HDA.

A task team had been formed, involving PRASA, the Western Cape HDA, the DPWI, the province and the relevant municipalities to manage the process, she said.

Basic services for the evicted

Community leader Nomzomo Gatuya said that they are willing to move if land with basic services such as water, electricity and toilets is made available.

She said there had been no clear communication on the relocation process but people had indicated they would need help with transport.

One of the shack dwellers, Nomawabo Yisaka, said she was happy land had been found. “I am happy to leave. This place was not safe for our children who are likely to get raped, hit by trains and electrocuted by illegal connections. My husband and I are not working. We will need help with transport and durable building material,” she said.

Avela Melato, who walks to work in Epping, said she and a few others would resist being moved because they wanted to stay close to work and children’s schools.