At least R30 million worth of copper pipes have gone missing at the CMJH since the April fire. 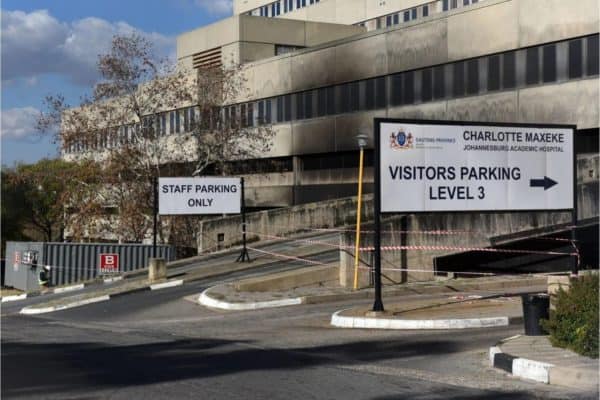 After the fire, which broke out on 16 April in the special dispensary stores of the hospital, no one was permitted inside. Picture: Nigel Sibanda/The Citizen

At least R30 million worth of copper pipes have gone missing at Charlotte Maxeke Johannesburg Academic Hospital (CMJH since a fire ripped through parts of the facility in April, despite the government spending R40.1 million on security annually.

Other items worth R200,000 have since been looted at the hospital.

The Gauteng health department announced last week that a case of theft had been opened at Hillbrow police station.

Modiba said the theft of the items was not going to have any major impact on service provision at the facility.

“No critical information was lost or compromised, the department is nevertheless concerned at the breach of security,” Modiba said.

Bloom said the continuous acts of theft were concerning despite the amount of money spent on security at the facility.

“R40 million is enough for a small army and is clearly excessive to ensure security for CMJH,” said Bloom.

“Thefts continue to occur and the security was unable to stop the trashing of the hospital by disgruntled workers in April 2018. The CMJH security contract is poor value for money and should be reviewed urgently. I am sure that millions of rands could be saved with a better contract, and this money is needed to provide better healthcare for patients.”

According to Mokgethi’s response, the burglar bars at the back of the wards had to be unlocked due to the fire assessment, and the security of assets was compromised due to about 150 fire doors that had to stay open for inspection purposes.

She said the burglar bars had to be removed because they contravened the fire regulations, and security was patrolling the fire escape routes to monitor unwelcome people.

Bloom also hinted that corruption could not be ruled out from these acts of theft, with contracts awarded to security companies still under scrutiny.

“I am deeply suspicious about all the security contracts at Gauteng public hospitals as they were irregularly awarded in October 2014 for a two-year period and then irregularly extended month by month at a total cost of more than R3 billion to date,” explained bloom.

“The Gauteng health department has a poor record with corrupt and grossly over-charged security contracts.”