Electricity supply has been cut in certain parts of Gauteng. 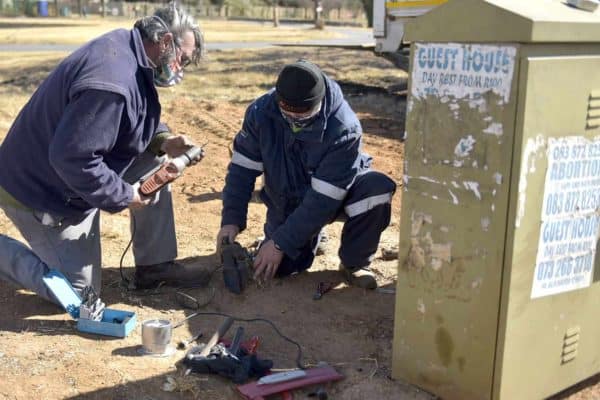 Eskom workers work on a link guage box in Croydon, Ekurhuleni 22 July 2021 after it was vandalised, with the copper tubes being stolen which caused an explosion within the nearby substation resulting in a 20 hour power outage in the Edenvale area. Eskom has reported an increase in these sort of incidents that cause not only power loss to areas but also costly repairs to the electricity infrastructure. Picture: Citizen.co.za/Neil McCartney

Eskom said it has stopped maintenance and repair work in troubled areas where angry residents attacked and threatened staff.

As a result, electricity supply has been cut in certain parts of Gauteng including Diepkloof, Ga-Rankuwa, Mnandi, Robinson and Zola Customer Network Centres(CNCs).

“We are also not restoring power if audits reveal that certain households defaulted on payments”, the power utility said.

“Several of our employees are often held hostage at transformer sites. The residents refuse to let them leave until they restore the power,” said Kotze.

The teams on the ground don’t have the authority or capability to restore power from the field.

Attacking Eskom’s field teams have now become somewhat of a norm. They are sometimes accompanied by private security, but that hasn’t helped the situation.

“We send them for medical treatment and trauma counselling. But now, understandably, they are reluctant to work in those areas,” said Kotze.

Xivambu condemned the attacking of staff.

“Intimidating our employees and contractors, holding them hostage and the overall threat to their lives is deplorable,” said Xivambu.

“We will continue to withdraw our employees from such life-threatening environments until we deem it safe for them to resume with our operations in those areas.”

Strain on the grid

“We have a responsibility to safeguard our assets to ensure that they run efficiently and in line with their designed capacity.”