Medics confirmed six people were killed while five others, including a child, sustained severe injuries. 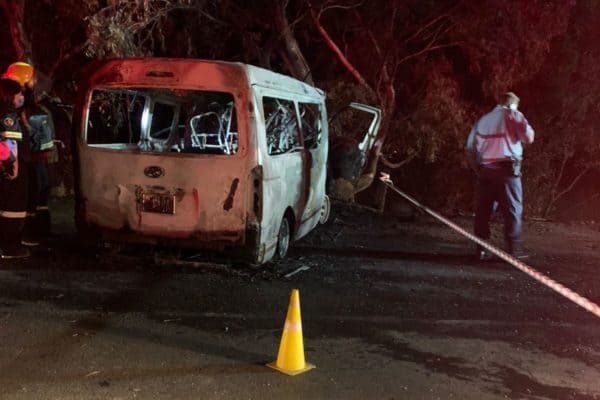 A crash involving a taxi in Krugersdorp Photo: ER24 EMS

Emergency personnel were called to an accident scene on Tom Muller Street in Krugersdorp on Saturday evening, shortly after 7:30 pm.

According to ER24 EMS paramedics, “six people were killed, and five others – including a child – sustained severe injuries when a taxi collided with a tree and caught alight”.

“Upon assessment, paramedics found five people, including a young child, with serious injuries”.

Members of the Gauteng Provincial Government attended the scene as well, while the Westrand Municipality Fire Department extinguished the blaze.

Cause of crash unknown

The patients were assessed on scene and rushed to nearby hospital for further medical assistance, while an emergency helicopter was activated to airlift the child.

Six burn victims were declared dead at the scene. The circumstances surrounding the accident remain unclear; authorities will investigate.

On Thursday, three trucks, a bakkie and a minibus vehicle were involved in a crash. KZN EMS spokesperson Robert McKenzie on Thursday told the media 11 people were declared dead at the scene.

Paramedics are currently treating 12 others. Some have been taken to hospital.

“11 people have tragically lost their lives in their crash”, McKenzie said in the latest update on the crash.