Fire destroys more than 200 military vehicles at Pretoria army base

No buildings were burnt and no one was injured in the fire. 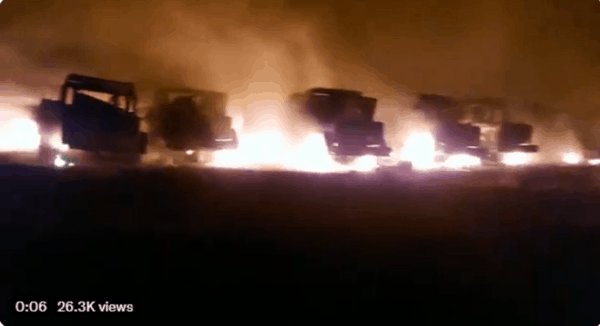 More than 200 military vehicles, including Nyalas, trailers and military equipment, were destroyed in a fire at the military’s Wallmansthal vehicle depot in Pretoria on Thursday.

An officer from the army based called the Sinoville Firefighting Association and reported the fire, which was said to be at the section where vehicles are parked, reports TimesLIVE.

The Sinoville Firefighting Association was joined by the Apies River rural fire protection association and battled the fire until the early hours of Friday morning.

While the South African National Defence Force (SANDF) was still counting their losses, Sinoville Firefighting Association chairperson JP Botha told the publication that more than 200 vehicles were affected by the fire.

No buildings were burnt and no one was injured in the fire.

SANDF spokesperson Mafi Mgobozi said it is suspected the fire started outside the base, where there is an informal settlement and spread to the base.

“Most of the vehicles which caught fire we don’t use, they were beyond repair, our people are still working to find out how many vehicles burnt the cost will come out from then,” he was quoted as saying by Jacaranda FM.