Bubele Africa is conserving and restoring nature one river at a time and this week it was the Jukskei’s turn. 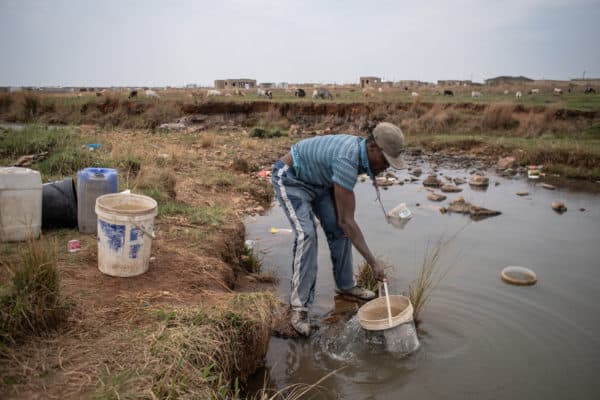 The Bubele Africa volunteers showed up in numbers with their gloves, gumboots and recyclable bin bags yesterday at the Jukskei River under the Marlboro bridge in Alexandra township.

Director of the organisation Shuldreae Rosen said the volunteers began cleaning the river last weekend and hoped to make notable progress by today.

“The cleaning campaign for this river will continue until Saturday. We want this to continue and not be a once-off project and want people to be able to hike down and swim in the river. We want to restore the fact that this polluted river can become a clean river,” he said.

Rosen added that not only does the organisation want nature to be preserved, it also wanted the people of Alexandra to take pride in the river.

“There’s a river we cleaned and how we know we’ve done a good job is because there is new bird life coming back, fish life is coming back and children are even swimming in the river,” he said.

“We’ve really restored life back into that river and this task might seem like a mammoth task at first, but there’s been significant progress.”

Alexandra resident Lethukthula Ncube said although the volunteers made positive progress since they began last weekend, the pollution problem began in townships.

“I started cleaning the river with other people on Saturday. There is progress and we are doing a great job,” he said.

“My only concern was the cleaning needs to also start in the township where people live because that’s where it begins and ends up in the river.”

Ncube said it was because the township did not have dustbins and dumping sites.

“I was thinking if people are supplied with enough dustbins and dumping sites, the littering wouldn’t be as bad as it is,” he said.

“We’ve tried to increase the number of dustbins where I stay to reduce littering but not everyone uses these dustbins and their littering ends up in the river hence it is so filthy and polluted.”

Another resident, Tintswalo Maluleke, said she volunteered to clean up because she was concerned about the pollution in the area which would make the residents sick.

“I heard about this initiative from the last community meeting we had in the township and have been here since Saturday,” she said.

“I’m also here because the littering in the community is getting out of hand.”

Rosen said the idea to start the organisation began as a concern from the founder and himself and wanting a solution.

“Today’s initiative of cleaning up the Jukskei river was Wendy Malpage the founding director’s idea,” he said.

“Wendy was visiting a river close to where we live and noticed that it was dirty and we decided to team up and clean up rivers and it’s been a year and a half. We employ 40 people per month to help; the money we receive is sponsored by people in the community and are open to more sponsors working with us and coming on board.”

Climate change: Removing CO2 from the air no longer optional
3 days ago
3 days ago
PREMIUM!

Karpowership: Energy diversification or setting of table for comrades to eat?
1 month ago
1 month ago
PREMIUM!

Climate change: Removing CO2 from the air no longer optional
3 days ago
3 days ago
PREMIUM!

Karpowership: Energy diversification or setting of table for comrades to eat?
1 month ago
1 month ago
PREMIUM!