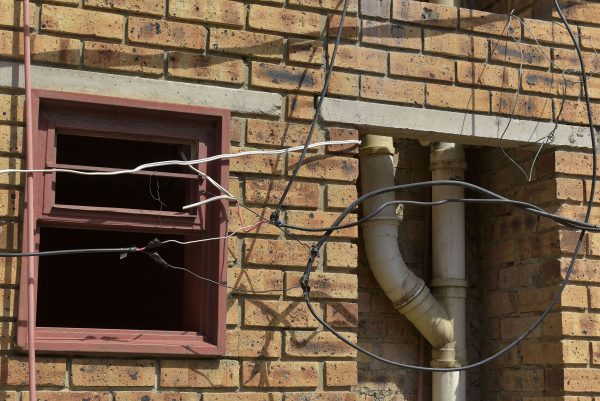 Illegal electricuty connections after a protest on London road after the community learned about a planned operation to cut off illegal electricity connections in the Riverpark area of Alexandra, 18 February 2021. The operation was cancelled, as they blockaded the road leading to the area. Picture: Neil McCartney

Although emotions were running high as River Park residents took to the streets following City Power’s operation to remove illegal electricity connections, residents of the 19th and 20th Avenues in Alexandra applauded the move.

According to some residents, the connections have either damaged their appliances or have been billed to their accounts, including the water bill, which they believed the informal dwellers near London Road had connected as well.

ALSO READ: Eskom concerned at number of attacks on employees by izinyoka

Meikie Selamolela said although they were happy with the operation, they were also hoping for a more permanent solution.

“I wish they could have at least cut these two trees or maybe even removed the damaged street light poles, because that is where they hang the cables they use to connect illegally,” she said.

“As soon as you leave, they’ll be here to connect again before the sun sets.

“Sad thing is we can’t do or say anything because they’ve been threatening some community members at gun point.”

Police officers opened fire with rubber bullets to try and disperse the crowd and prevent them from attacking City Power spokesperson Isaac Mangena.

The angry residents said he had promised to not cut their power until they were able to install proper electricity.

However, Mangena denied having made any promises. Meanwhile, Eyewitness News reported that a resident was killed in clashes with the police at the Alex mall.

WATCH: Parts of Joburg south plunged into darkness after substation catches fire
4 days ago
4 days ago

WATCH: Parts of Joburg south plunged into darkness after substation catches fire
4 days ago
4 days ago