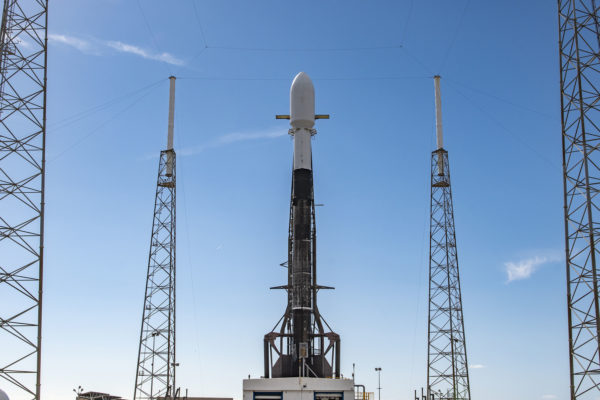 SpaceX will be launching three South African nanosatellites – known as the MDASat1 satellite constellation – onboard a Falcon 9 rocket as part of the Transporter-3 mission.

“A first for South Africa’s space industry, three locally produced nanosatellites will be launched into space today,” the department of science and innovation said in a statement.

The launch window begins at 10:25am Eastern Standard Time, or 5:25pm South African Standard Time (SAST) for those viewing from home soil.

The stream below will go live at 5:15pm.

SpaceX will use a Falcon 9 rocket booster classified as B1058 – the company’s own partially reusable two-stage-to-orbit medium-lift launch vehicle – to carry the cargo into space.

Following a successful liftoff from the Cape Canaveral Space station at the Kennedy Space Centre in the United States, the Falcon 9 rocket’s first stage will return to Landing Zone 1.

If anything goes wrong prior to liftoff, a backup launch window has been scheduled for Friday, 4 January at 5:25pm SAST.

If the launch is successful, however, the South African nanosatellite constellation will be deployed in low-Earth orbit at an altitude of 525 kilometres.

The Falcon 9 is an impressive piece of scientific ingenuity in its own right.

When the reusable rocket returns to Earth, the booster will deploy its grid fins and activate what is known as boostback burn – when the engines flip to the reverse velocity of the stage.

The rocket will then perform a flip manoeuver as the cold gas thrusters kick in and begin its ‘entry burn’ before being aerodynamically guided into a vertical landing position on the landing zone.

Its return to Earth will be announced by sonic booms across the US Space Coast.

It can carry payloads of up to 22,800 kilogrammes into low-Earth orbit, and up to 8,300kg into geostationary transfer orbit.

It can be used more than 100 times and is also the most-used rocket type currently in operation.

Described as a “significant milestone for South Africa”, the MDASat-1 will mark the first launch of a satellite constellation developed entirely in Africa.

The MDASat-1 constellation consists of nine cube satellites which will detect, identify and monitor vessels in near real-time to improve the South African maritime domain awareness capability.

This, in turn, will assist South Africa “to capture a valuable share of a niche market in the fast-growing global satellite value chain”, Nzimande said.

Think of a rideshare payload as a way for smaller satellite operators to hitch a ride aboard a rocket already launching a ‘primary’ payload – at a fraction of the price of a rocket launch.

Onboard the Transporter-3 will be 105 spacecraft in total, including microsats, PocketQubes, orbital transfer vehicles, and our very own, proudly-South African cargo.

A complete list of the rideshare’s spacecraft can be viewed here.

Operation Phakisa is an initiative which focuses on South Africa’s Oceans Economy – a sector capable of growing the country’s GDP by $12 billion within the next two years.

It will create more than 1 million jobs, while the project will collect statistical data of the South African maritime zone, with a special focus on vessel detection.

The first phase of Operation Phakisa – ZACube-2 – was funded by the Department of Science of Innovation and built by graduates of F’SATI’s Satellite Programme at Cape Peninsula University of Technology (CPUT).

The ZACube-2 payload – consisting of technology demonstrations of Automatic Identification System (AIS) message receptors and a medium resolution imager – was launched in 2018.

MDASat-1 is the second phase of Operation Phakisa.