Eight undocumented foreign nationals were arrested at OR Tambo International for attempting to enter the country through a fire hydrant. 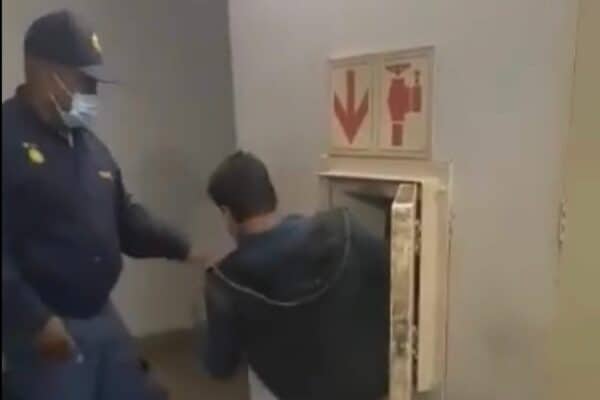 Screengrab of the video.

This comes after eight undocumented migrants were arrested at OR Tambo International Airport for attempting to enter the country through a fire hydrant.

It also shows police officers awaiting the men in the process of exiting the fire hydrant door.

Motsoaledi says the Bangladeshi and Pakistani nationals used the Eswatini and Mozambique routes to enter the country through O.R Tambo International.

Motsoaledi said since the incident, a Home Affairs official in immigration was arrested.

“He was allegedly aiding Bangladeshi citizens into the country illegally so they have been on high alert.”

Motsoaledi said he was contacted by an airport immigration official who sent him pictures.

“I found out that four Bangladeshi and four Pakistani were arrested. In recent days the number of Bangladeshi and Pakistani citizens who come via Qatar Airways en route to Eswatini or Lesotho but they use OR Tambo as a transit point…”

The latest arrest is part of ongoing efforts by Home Affairs authorities and police to punish syndicates working with foreign nationals intending to enter the country illegally.

Recently, the kingpin of a syndicate, fraudulently issuing passports and other crucial documents to foreign nationals was arrested in a sting operation.

Motsoaledi and Mbalula say authorities and law enforcement agencies will remain on high alert to ensure no corrupt or criminal activities take place at airports.