The Presidency dismissed any suggestion that Ramaphosa was liable for the Marikana massacre. 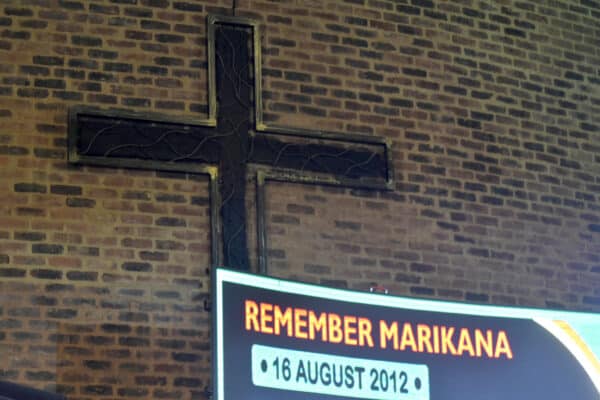 A memorial service for the people that died during the Marikana massacre at the Gracepoint Methodist Church on 16 August 2021. Picture: Neil McCartney

President Cyril Ramaphosa has welcomed a court ruling regarding the Marikana massacre, but slammed the “politicisation” of the 2012 tragedy.

Police on 16 August 2012 gunned down 34 striking miners and about 280 workers were arrested at the Lonmin platinum mine in Marikana, North West.

The protesting workers were demanding a salary of R12,500 and better living conditions.

In 2015, Vayeka Sivuka – who was accused number one among those arrested – and 328 other mineworkers then approached the Johannesburg High Court asking that Ramaphosa and Lonmin be held liable for the actions of the police and also sought compensation.

Ramaphosa at the time was a shareholder and non-executive board member at Lonmin, which was later acquired by Sibanye Stillwater.

The high court delivered its ruling on Friday, with the full bench upholding four of Ramaphosa’s exceptions, but rejected one.

Judge Frits van Oosten found that the president had taken part in, planned and endorsed the cooperation between Lonmin and the police, which had culminated in the deaths, injuries, arrests and detention of the striking mineworkers.

“I agree, and it is accordingly my finding, that the plaintiffs have satisfied the test of legal causation,” Van Oosten ruled.

According to City Press, the judgment enables the surviving mineworkers to hold Ramaphosa personally liable for what they suffered.

Ramaphosa has since reacted to the judgment, with the Presidency dismissing the suggestion that the president was liable for the Marikana massacre.

“Disturbingly, is the ongoing politicisation of this tragedy leading to the unfair targeting and isolated allocation of responsibility to the President.

“Others have sought to create a false impression that President Ramaphosa bears liability for the killings,” Presidency spokesperson Vincent Magwenya said in a statement.

Magwenya also said the court agreed with Ramaphosa’s arguments and “held that the plaintiffs had not established that the president bore any legal duty”.

“Furthermore, the court made no finding that the President was in fact the cause of harmful conduct. The proceedings were not a trial, and no evidence was led. The court was merely engaged in a legal debate regarding whether the plaintiffs’ allegations complied with the law,” he said.

“The court rejected the plaintiff’s argument that certain email communications from President Ramaphosa sought to call for the murder of the striking workers,” Magwenya added.

Ramaphosa’s email – dated 15 August 2012 – read: “The terrible events that have unfolded cannot be described as a labour dispute. They are plainly dastardly criminal and must be characterised as such. In line with this characterisation, there needs to be concomitant action to address this situation.

“You are absolutely correct in insisting that the Minister and indeed all government officials need to understand that we are essentially dealing with a criminal act. I have said as much to the Minister of Safety and Security.”

Meanwhile, Magwenya said the court also agreed with Ramaphosa that “there was no factual basis for the allegation that collusion between the president, the government and senior police officers would have led to the deaths of workers”.