'I will not depose to an affidavit as presently directed,' Zuma said in a 21-page letter to Chief Justice Mogoeng Mogoeng. 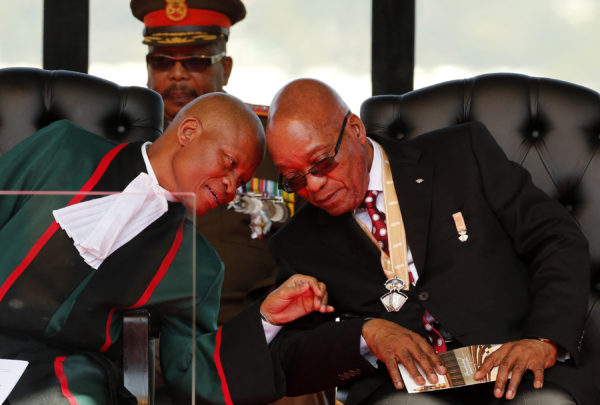 Chief Justice Mogoeng Mogoeng and former president Jacob Zuma ahead of his inauguration ceremony in his final term at the Union Buildings in Pretoria on 24 May 2014. Picture: Siphiwe Sibeko/AFP

Former president Jacob Zuma has missed the Constitutional Court (ConCourt) deadline to make representations to the apex court outlining how he wants to be censured should he be found guilty of contempt of court.

Zuma had until the close of business on Wednesday, 14 April 2021, to file an affidavit. The affidavit was Zuma’s last chance to persuade the ConCourt not to send him to prison if it finds that he is in contempt of court.

“I will not depose to an affidavit as presently directed,” Zuma said in a 21-page letter to Chief Justice Mogoeng Mogoeng.

Zuma said the questions posed to him were done with the “presumption that the Court that heard the application of the Chairperson of the Commission of Inquiry into State Capture… has not determined the merits of whether I am guilty of contempt of court.”

The nature of the letter itself is “unprecedented”, Zuma continued.

Zuma defied a Constitutional Court ruling ordering him to appear before the Commission of Inquiry into Allegations of State Capture when he walked out of an active session during a tea break in November last year.

Before this, a summons was issued compelling Zuma to appear before the Commission.

New dates were set for Zuma to appear again, which did not amount to any further testimonies.

This would be the first time the Constitutional Court has had to deal with a contempt of court matter, let alone contempt of its own court, advocate James Grant told The Citizen on Tuesday.

On Tuesday, the Supreme Court of Appeal (SCA) dealt Zuma another blow when his appeal over his legal fees being paid by the state attorney was dismissed.

The court orders obtained by the DA and EFF date back to 2006, when Zuma faced prosecution on the corruption charges he has now been asked to answer to.

However, many believe Zuma may seek solace under the wing of ANC deputy secretary-general Jessie Duarte, after a recording emerged of her doubting the integrity of the state capture commission.

It was said on Tuesday it was likely that Zuma would attempt to overturn the SCA’s decision.