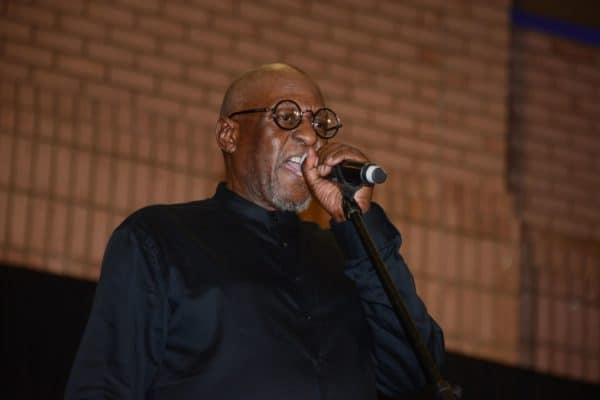 Tsepo Tshola dancing and singing during the memorial service of the late Hugh Masekela at the University of Johannesburg, Soweto Campus on January 28, 2018. Picture: Gallo Images/Frennie Shivambu

According to reports, he passed away after a recent battle with Covid-19 landed him in hospital.

In the 70s, Tshola was part of a musical group called Sankomota.

The band (originally named Uhuru) was from the ‘mountain kingdom’ of Lesotho and was formed around 1976. It consisted of members such as Frank Leepa, Moss Nkofo, Black Jesus, Moruti Selate and Pitso Sera, among others.

At some point, the group was even banned in South Africa.

In the late 80s, they relocated to London after Tshola joined Hugh Masekela on a world tour. Tshola and Masekela then became friends.

The ‘Ho Lokile‘ hitmaker was last known to be living in the Johannesburg suburb of Kensington where he lived in a Victorian-style home that doubled as the HQ for his label Killer Joe Records.

Drum reports that artists such as Joe Nina and Stan Letsela were part of the label.

He leaves behind two adult sons named Kamogelo and Katlego who currently live in Lesotho.

Tshola never remarried after his wife died three decades ago.

In recent years, he collaborated with artists such as Cassper Nyovest and Jub Jub.

This is a developing story. We will update it as more information becomes available.