Khethani Richard Shange claimed an argument arose when security guards questioned whether he had paid the admission fee. 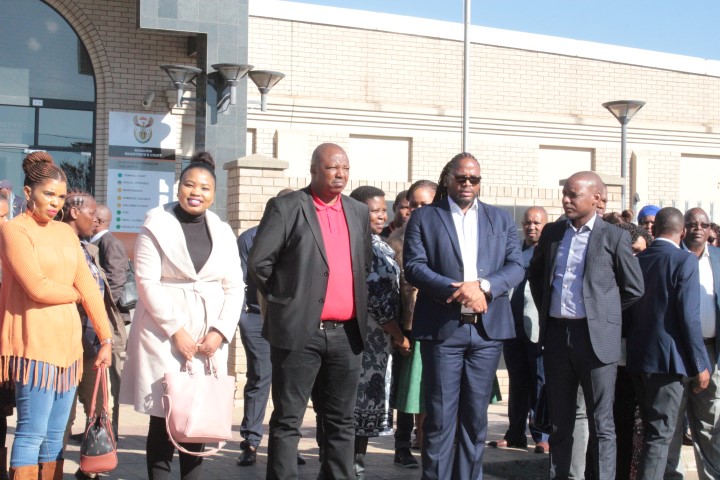 Convicted killer Khethani Richard Shange, with a history of running from the law, managed to persuade the court to grant him bail in the Khazins Shisa Nyama murder case.

Social media erupted with residents’ comments, voicing their anger and disappointment in the decision taken and in the justice system, and concerns about whether he would perpetrate further acts of violence, reports Newcastle Advertiser.

“There is no justice in South Africa,” read one comment.

Shange was released from custody on R10,000 bail last Friday, after pleading exceptional circumstances before Magistrate NF Khuzwayo at the Madadeni Magistrate’s Court.

Shange indicated he would be pleading not guilty to the charges of murder and attempted murder he would face at his trial, claiming he acted in self-defence when the establishment’s security personnel, Lindani Sibeko, 22, and Sabelo Mbatha, 30, were shot dead on June 15.

According to Shange’s testimony during the bail application, he went to Khazins Shisa Nyama that night “to meet friends and have a good time”. He further alleged he was attacked by the guards, who hit him above his right eye and kicked him when he fell to the ground.

Questioned by Magistrate Khuzwayo on how he came to be in possession of an unlicensed firearm during the shooting, Shange stated: “It fell off one of the guards while they were assaulting me.”

He claimed not to know the guards personally and claimed an argument arose when they questioned whether he had paid the admission fee.

Investigating officer, Renesh Sewlal disputed Shange’s version of events, and said he had video footage and witness reports which proved Shange’s attack on the guards was completely unprovoked.

“On June 15, around 8pm, the applicant went to the entrance of Khazins in Section 6, Madadeni. His face was covered in something white and he wore a black hat. Only his eyes were visible. This person produced a firearm and fired shots in the small passage of the entrance premises. He directed the shots at the guards, where two were fatally wounded and passed away on scene. One female was wounded on the lower half of her body. The suspect then turned around and walked away from the scene. Community members then gave chase and the suspect started firing shots [at them].”

According to Sergeant Sewlal, a detective of 16 years, the suspect continued to shoot at community members who took cover, but later ran after him until he eventually ran out of ammunition.

A witness told Sgt Sewlal that he [Shange] reloaded the firearm and resumed firing shots. Three community members, who gave chase, were soon joined by an off-duty police officer, resulting in a further exchange of fire.

Shange was eventually arrested in a community garden in Section 6, where he attempted to hide. A 9mm pistol was found in his possession, with two live rounds and a magazine.

The firearm still had the original serial number.

Police were able to determine the firearm belonged to a Gauteng police officer and had been stolen in Ladysmith. Sgt Sewlal informed the court he believed there was a good possibility of Shange fleeing to avoid trial, and intimidating witnesses if he was released.

He brought to the court’s attention the fact that Shange had been convicted for murder and attempted murder, for which he had received a 27-year sentence.

After the murder, committed in 1991, Shange went to the night vigil being held in memory of his victim and opened fire. Sgt Sewlal believes Shange’s intention was to kill any witnesses to the murder.

Shange was released after serving nine months of his sentence, after the court found the murder was committed for political reasons.

Despite taking the opportunity as a “lifeline”, Shange committed another crime in 1993, and after being released on bail, failed to attend further court proceedings.

His photo was circulated among police stations in 1995.

He was only found in 2001, however, when he was found guilty of trespassing, assault, malicious damage to property, and impersonating a police officer.

“Considering the counts he is now facing, there is a likelihood he will evade trial. He has a history of doing so. The safety of the witnesses is not guaranteed. We can see what the applicant is capable of, should he be released.”

Khuzwayo said the applicant’s reasons for bail to be granted could be regarded as exceptional.

“The applicant put forward his reasons to be granted bail, which included being a father, being permanently employed and being the sole provider for his family, which particularly involves taking care of his children and other commitments he must attend to and take care of as a man, before he begins his trial. Although the state did argue the applicant was a flight risk, it didn’t hold any substantial proof to show the applicant might interfere with state witnesses, as the state had said that was their biggest fear.”

In granting Shange bail of R10,000 however, Khuzwayo attached certain conditions, including the surrender of his travel documents to Sgt Sewlal.

“He attends every court hearing he is due for … He must also report to the charge office at Madadeni Police Station between 6am and 7pm on a Wednesday and Friday each week. He is also not to enter the premises where the murder incident happened, and he must not interfere with state witnesses until his matter is finalised. If he fails to abide by these conditions, this will result in him being placed in police custody.”

Khuzwayo also sought assurances that if Shange was granted bail, he wouldn’t interfere with state witnesses.

“I have more important things to worry about than to intimidate witnesses,” Shange replied. “I understand the nature of the charges and the seriousness of them, and no one can go back and undo what has happened. I have conditioned my mind to face the might of the law, and all charges against me.”

Shange’s case was postponed to August 2 at the Madadeni Magistrate’s Court.

Supporters of Shange were visibly elated outside the courtroom, hugging and shaking hands, stating his bail was deserved.

One supporter, who didn’t want to be named, said security guards at the Shisa Nyama were known for being rough with patrons.

“Guards at that place have been a problem for many people, for a long time. They are too aggressive, even to female patrons. People would go lay charges at the police station and the owner would pay people off. It’s sad that people had to die, but the guards there were getting out of hand.”

“There is no such thing! There has never been any cases reported at the police station; I don’t know where that comes from. We have had people who might complain they tore a jacket or something like that in an altercation, and we compensate them as such, but there was never any police cases reported. There are minor mistakes here and there, and we try our best as a business to fix those.

“We have moved the previous security personnel to another department, and outsourced a new security company to deal with our overall security,” he concluded.

Robbers sentenced for robbery, murder of former UKZN professor
7 hours ago
7 hours ago

Robbers sentenced for robbery, murder of former UKZN professor
7 hours ago
7 hours ago