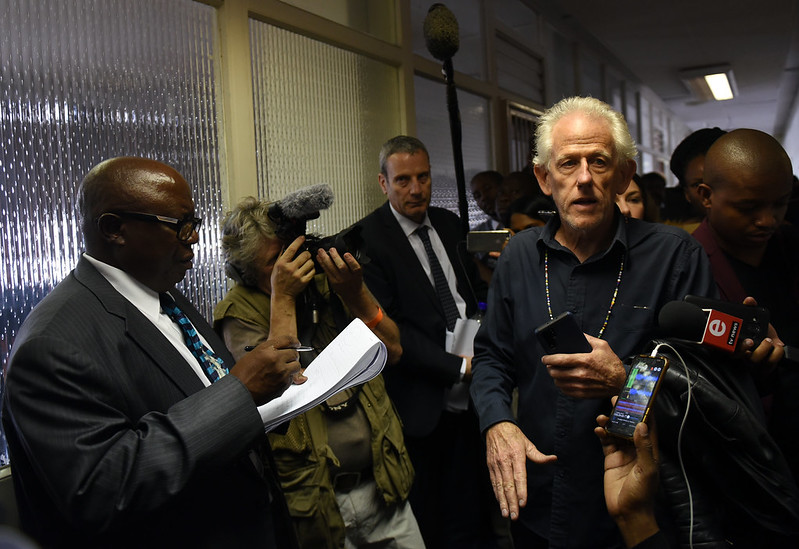 An anti-apartheid activist has told the inquest into Neil Aggett’s death in police detention that he saw officers harassing and hitting his fellow freedom fighter less than two weeks before his questionable death.

Counsel for Aggett’s family conducted a site inspection at the Johannesburg Central Police Station, formerly known as the infamous John Vorster Square, with former detainees, including Maurice Smithers, and police officers on Tuesday.

The inspection was part of the reopened inquest into Aggett’s death. The inquest started on Monday in the South Gauteng High Court in Johannesburg.

Aggett was found hanging in his cell 70 days into his detention in 1982.

The first inquest, held the same year, found that Aggett committed suicide, but his family now seeks to overturn these findings.

Standing in a room where he was held in detention back in the early 1980s, Smithers told counsel he remembered looking through a window separating two rooms and seeing Aggett with police officers.

“During the times I was interrogated, for a month or so, I was brought to John Vorster [Square] and taken to one of these rooms,” Smithers said.

“About ten days before he died, I was brought from Randburg Police Station to be taken to the optician… I was brought and put into this room, if I’m not mistaken, with a couple of black police officers.

“I looked into the next room through this ribbed glass, and I saw this activity taking place and I realised it was Neil,” Smithers said.

He explained he saw Aggett in the room with a group of people and he “was being made to run up and down on the spot and to go down and do push-ups… He would disappear and they’d be shouting at him”.

“One of the guys was walking around and touching something which looked to me, through the glass, like a rolled newspaper or magazine and he was hitting him – not beating him, more as a kind of harassment, while he was doing the exercises,” he recalled.

Smithers said he felt like they were trying to intimidate Aggett.

“I said to myself, I must record this in my mind,” Smithers said.

After Smithers was taken to his optician appointment, he was brought back to the same room about 45 minutes to an hour later.

Aggett was still being made to do the exercises.

Then, Smithers said, it looked as if Aggett was naked.

“He was sweating, you could see he was wiping his brow. At the same time, it was routine – running on the spot, lifting his arms above his head and then going down… They would push him as he was doing the push-ups.”

The police officer looking after Smithers recalled Smithers, but not Aggett.

He said he knew someone was in the next room and heard the sound “of a newspaper hitting the table and I saw a person jumping up and down”.

Smithers said this was his second time back at the old John Vorster Square Police Station. During the first time, he said he was overcome with emotion.

“I was very nervous coming today because [on the first visit] I broke down… There was one brief moment when I was talking to the judge when I had to stop talking and had to just contain myself,” Smithers told News24.

“I was in and out of jail a number of times, and you went in and you handled it and you came out and you got on with things.

“There was no counselling [for me], but I guess there’s an element of post-traumatic stress that we all have, it just comes out every now and then,” he said.