Court hears Coka brothers shot in the back, one killed execution style

The Piet Retief Magistrate's Court heard how farmers allegedly finished off one of the brothers with a bullet in the head while he was on the ground. 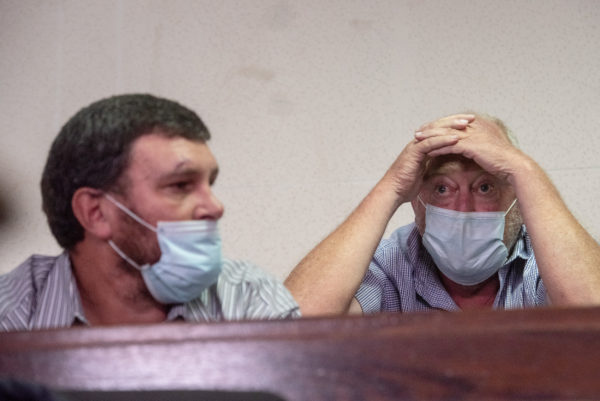 A sparsely packed Piet Retief Magistrate’s Court gallery was shocked on Tuesday by revelations that brothers Zenzele and Mgcini Coka were shot in the back and one was finished off “execution style” as he lay helpless on a dirt road.

According to the investigator, warrant officer Vukile Nhlapo, Zenzele Coka, 39, who worked at Pampoenkraal farm, suffered a fatal bullet wound to the back, while his younger brother, Mgcini, 36, was hit once in the back and head.

He was testifying in the bail application of Daniel Malan, 38, Cornelius Greyling, 26, Othard Clingberg, 58, and Michael Sternberg, 31, who have each been charged with two counts of murder and one of assault with intent to inflict grievous bodily.

Their co-accused, Patrick Yende, a security guard at the farm, is facing charges of attempted murder and kidnapping.

“Mgcini was shot in the back, with the bullets lodged in his chest. That gave us the position where he died. He was shot by (Clingberg) and then finished off with a single shot in the head,” Nhlapo told a shocked courtroom on Tuesday.

The prosecution will argue that the deceased were not armed, were not on private property, posed no risk to the farmers and that the gate to their homestead was blocked when they were shot and killed.

Nhlapo said according to witness statements, seven people had been protesting at the farm and were up against about 50 farmers armed with guns when a scuffle broke out before the shooting.

He explained that during an earlier scuffle at the farm on that day, a farm dweller had been caught by the farmers and was being assaulted when the brothers arrived.

“(Mgcini) was not even aware what was happening. He was driving from Dirkiedorp when he was stopped by other dwellers who said the farmers had kidnapped (Mlaba Hlatshwayo) so they wanted to take him to the clinic,” Nhlapo said.

ALSO READ: ‘You died for your land’ – murdered Coka brothers laid to rest

He said Mgcini attempted to force open the gate but was pulled back by the others fearing that he would be shot.

Nhlapo said Clingberg started punching him (Mgcini), sparking pandemonium, and then shots rang out, before the two brothers lay dead.

Clingberg in his affidavit, however, said Mgcini was violent, had his shirt off and three farmers had already been severely injured.

He said in the chaos he heard shots fired. It appeared that Mgcini was firing and had already hit his brother. Then Clingberg fired two shots.

Prosecutor advocate Robert Molokoane said they would argue the deceased were not violent but defenceless and that one of them was executed.

“We will argue on his execution. A witness will tell how they were fired at with a rifle by one of the accused (Daniel Malan) while firing and calling him the K-word. There will be more charges of murder, defeating the ends of justice and two arrests are yet to be made,” he said.

No time to change price method, Eskom says in court bid against Nersa
6 hours ago
6 hours ago

No time to change price method, Eskom says in court bid against Nersa
6 hours ago
6 hours ago