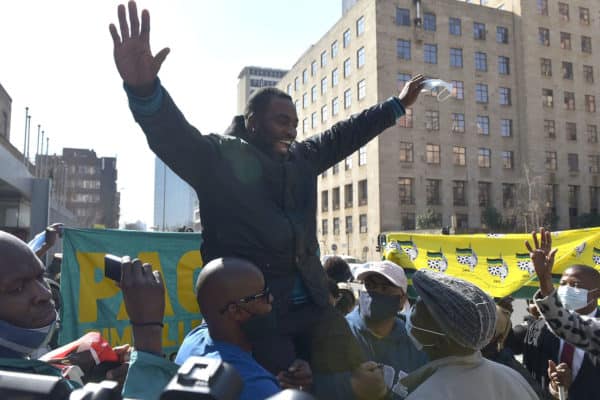 Advocate Ike Khumalo with his supporters outside the Johannesburg Regional Court, 4 August 2021. He is facing charges of allegedly inciting violence during the recent unrest in the country, he was given R3000 bail. Picture: Neil McCartney

Khumalo was arrested last week in Mondeor, south of Joburg, for incitement of public violence in the wake of the civil unrest and violence that rocked parts of Gauteng and KwaZulu-Natal in July.

More than 300 people lost their lives due to the violence, with damage to infrastructure and shopping malls running into billions of rand.

Khumalo faces six charges, including contravening the Riotous Assemblies Act and the Cyber Crimes Act. The State indicated in court this week that treason charges could be added to his charge sheet.

The State alleges that he posted several videos on social media inciting violence and treason. He allegedly instructed the public to kill politicians and burn down their houses.

During his bail application, the State argued that Khumalo should be granted R5,000 bail but he asked the court to reduce this to R2500.

As part of his bail conditions, Khumalo was instructed to suspend all of his social media accounts, refrain from participating in any illegal gatherings, and report to his local police station once a week.

He was also ordered to hand over his passport and to get permission from the investigating officer should he leave Gauteng.

A group of people had gathered outside court on Wednesday to show their support for Khumalo.

The case was postponed till 6 September 2021.