Thanduxolo Nobhongoza was shot dead in broad daylight outside his home in Cala extension one on 29 November 2018. 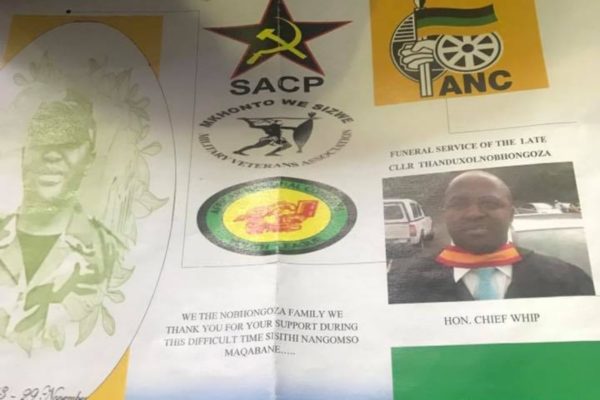 The funeral of Thanduxolo Nobhongoza, who was murdered in November 2018. Photo: Facebook

The three men responsible for the 2018 murder of a Sakhisizwe local municipality politician and community services manager have been sentenced to life imprisonment.

Hitmen Thembisile Sixakaza, Mnoneleli Mpusu and Mawande Dlephu gunned down Thanduxolo Nobhongoza in broad daylight outside his home in Cala extension one in the Eastern Cape on 29 November 2018.

Nobhongoza was the chief whip of the ANC in the municipality.

The alleged mastermind behind the murder was a former chief traffic officer at the municipality, Loyiso Nyembe.

Nyembe died due to ill health during the course of the trial.

The reason for Nyembe wanting to kill Nobhongoza, the National Prosecuting Authority (NPA) explained, was because he had been accused of fraud and corruption in an unrelated case, after illegal selling drivers licences.

The operation was said to have been arranged by Nyembe from Qumbu. On the day of the murder, the hitmen drove to meet Nyembe in Khowa, before travelling to Cala.

There, they found Nobhongoza walking towards his home, and shot him. Community members witnessed the murder.

During the trial, the hitmen pleaded not guilty, saying they were only in Cala to fetch a car from Nyembe.

One of the middlemen involved in the murder was granted immunity, and was said to have pointed Nobhongoza out to the hitmen.

In addition to the life sentences, the hitmen were also convicted on charges of illegal possession of firearms and ammunition.

These seven-year charges will run concurrently with their life sentences, the NPA said.