WARNING: Video contains explicit content. Viewer discretion advised. The video shows the woman being used as a punching bag, beaten with a broom and kicked until she gets on her knees to plead for mercy. 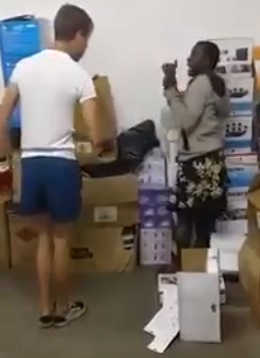 Footage of a woman being brutally beaten by a group has surfaced on social media. The two-minute video shows a man wearing construction gloves severely punching a woman. The screaming woman apologises to her attackers, acknowledging that she would never steal again.

“I’m sorry my brother,” said the screaming woman, while shaking uncontrollably. She is then struck with a broom as one of her attackers – wearing gloves – asks for a phone to be removed from his pocket while he takes a break from striking the woman.

“Moer hom,” one of her attackers shouts as the woman pleads for mercy. The woman appeals to her attackers and assures them that they will not see her again. This, however, does not deter the group.

A voice of one of the attackers is heard shouting “die mense HIV gee,” as he continues to strike the woman with jabs to the jaw. The woman clutches her jaw, an indication that she may be injured. The perpetrator continues to kick her while another hits her with a broom. They then take turns hitting the woman, who is clearly wailing for mercy.

“Don’t come back here,” they shout to the woman, who is already on her knees, pleading for forgiveness.

One of the assailants can be heard asking a person named Serrie to send the video of the assault to him.

The location and motive of the attack are still unknown. The footage appears to be taken from inside a storeroom, as it shows the attackers surrounded by boxes.

What kind of fuckery is this? Who are these people beating this girl? These people must be found. pic.twitter.com/AtkxoSyFtU