Young girl left with nothing after rape, mother’s murder

A nine-year-old girl's possessions, including school shoes and books, were destroyed after her mother burned to death in their home. 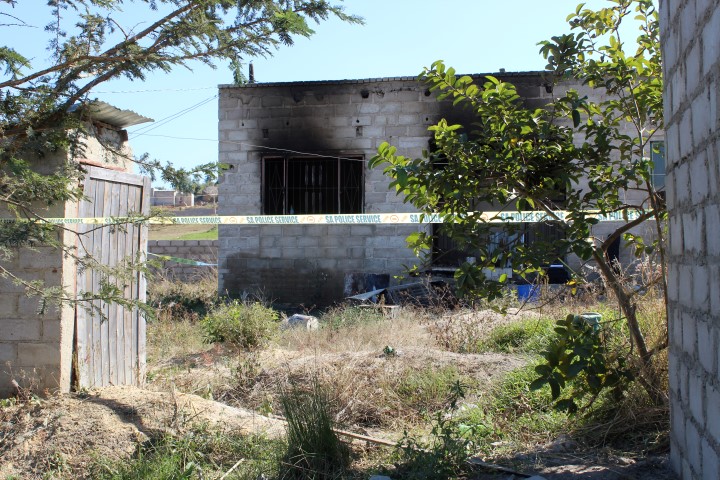 What was left after the little girl and her mothers' house was burnt. Image: Lowvelder

Police spokesperson Col Mtsholi Bhembe reported that a girl was raped and her mother burnt to death in the house they shared in Mpumalanga early on Sunday morning.

A source close to the investigation told Lowvelder that the child did not even have shoes or a school book left after the fire. “She is staying with family but has no clothes or anything.”

Police reported that neighbours were awakened by the girl crying, and said that she could barely walk. “They saw the house that the child shared with her mother was on fire.”

The neighbours called the fire department, who came and extinguished the fire. “The burned body of who we suspect is the mother was found in the house.”

Neighbours told media during a visit to the scene on Wednesday that the suspect was a boyfriend of the deceased and was looking after the child on Saturday night.

Family members claimed the child told them her mother had come home with a strange man she did not know.

“She says the man raped her and when he was finished, she saw him open the fridge and take the food out and put it in a bag. He also took her mother’s phones. That is when the girl ran out of the house to get away. Then she saw the house on fire.”

“These perpetrators should be given lengthy jail sentences in order to send a strong message that we are intolerant of the abuse of women and children,” Shabalala said.

She added that victims and survivors of these tragedies should be given adequate support so that they were not subjected to secondary victimisation.

“We should all play a role in ensuring that women and children are safe. Innocent people should not die while we watch and keep quiet,” she concluded.

Anyone wishing to donate clothing or items for the child can contact Capt Dimpo Nkosi 082 373 8916.

A case of rape, arson and murder was opened. Bhembe confirmed that no arrest has been made as yet, but anyone with information that can assist police in their investigation is urged to contact Capt Pat Banda at 082 449 0334 or the SAPS Crime Stop number 08600 1011.