Spokesperson Ephraim Nyondo said the incident was an act of 'cowardice' from 'forces of darkness aimed at instilling fear in the hearts of ECG members'. 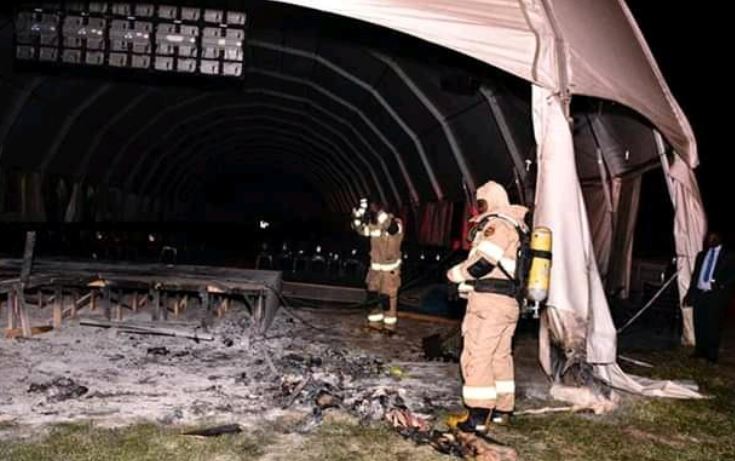 The scene after a fire was put out at two overflow tents used by Prophet Bushiri's church, 12 February 2020. Picture: Twitter / @MujuruShow

Two large tents belonging to prophet Shepherd Bushiri were torched in Pretoria on Wednesday night during a prayer session in a hall nearby.

Bushiri’s spokesperson, Ephraim Nyondo, said the tents were used as an overflow area for the church service.

“In the wake of Wednesday night’s attempt to raze two of the church’s five large prayer tents at the Pretoria Showgrounds, the Enlightened Christian Gathering (ECG) Church is deeply concerned by the incident and, generally, immensely disappointed by the tireless attacks on its leader prophet Shepherd Bushiri and the congregation,” he added.

He said the attacks have prompted the church to ask the state to intervene.

“The church deeply feels that it is under severe attack and it is, with sincerity, seeking the hand of the state to put a stop to this escalation.”

Nyondo said the incident was an act of “cowardice” from “forces of darkness aimed at instilling fear in the hearts of ECG members”.

“We are, hereby, calling on the police and all investigating agencies to get to the bottom of this unfortunate incident so that justice is not just done, but also seen to be done.

“As a church, we will continue to be in prayer, asking God to protect us and also to shame and expose those who want to destroy the church He built,” Nyondo said.

Bushiri faced charges of fraud, money laundering and the contravention of the Prevention of Organised Crime Act for offences he allegedly committed from 2015.

The case was set to continue in July this year.