One suspect was shot and injured, and a second suspect was arrested, while the other two suspects fled on foot. 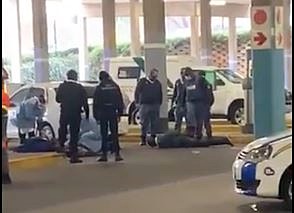 Swift response by alert police officers and security guards led to the arrest of two suspects who were caught soon after allegedly committing a robbery and hijacking at Cresta Mall in Johannesburg on Tuesday.

Two other suspects are still on the run.

It is alleged the four suspects, who were driving in a white Toyota Etios, first hijacked an Opel Corsa at Cresta Mall’s parking lot.

Police spokesperson Captain Kay Makhubele said the suspects also allegedly robbed a couple of their cellphones and other items.

“As the suspects were about to exit the mall, they were confronted by the police and security guards and a shootout ensued.

Scenes from parking area of Cresta Shopping Centre where two suspects have been shot & injured after allegedly attempting to rob a man of his Rolex watch @SABCNews @SATODAY_SABC details to follow pic.twitter.com/Vyl15hpenv

“One suspect was shot and injured, and was taken to hospital where he is under police guard. A second suspect was arrested, while the other two suspects fled on foot.

“The police recovered an unlicenced firearm, the hijacked vehicle and other items robbed from the couple. They have established the suspect’s Toyota Etios was used as an Uber car,” said Makhubele.

The suspects are expected to appear in the Randburg Magistrate’s Court soon.