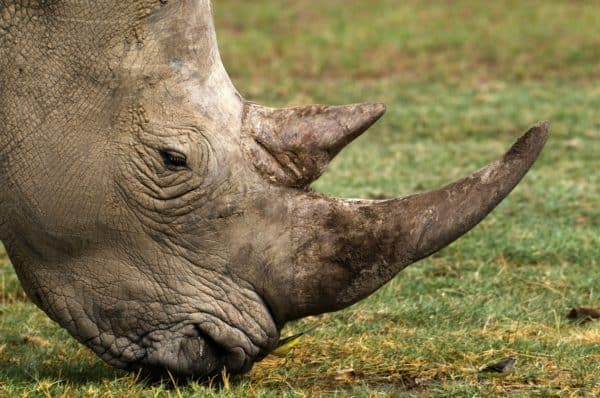 Customs officers of the South African Revenue Service (SARS) seized 32 pieces of rhino horn, weighing 160kg, at a cargo transit shed at the OR Tambo International Airport on Saturday, 17 July.

In a statement, Sars customs officers were conducting a “manifest profiling with the Detector Dog Unit at the airport when one of the dogs identified a suspicious shipment destined to Malaysia (Kuala Lumpur),” the statement read.

The South African Police Services’ Directorate for Priority Crime Investigations (Hawks) were alerted about the detection. A criminal case was registered with the SAPS for further investigation.

The last big bust at OR Tambo was in February of this year. The Hawks confiscated a shipment of rhino horns worth more than R53 million at OR Tambo International Airpot also destined to Malaysia.

The rhino horn after the detector dog unit selected a suspicious shipment declared as “HP Cartridges Developers”, according to the statement from Sars.

“The three-piece shipment was taken to the X-ray scanner for non-intrusive inspection, where the image analysis reflected objects resembling the shape of rhino horns.

“The shipment was taken for physical inspection and upon inspection of the boxes, 18 pieces of rhino horn were found concealed in traditional clothing. The goods weighed 63kg.”

“Those that are determined to destroy the rich natural endowment of our country, which is a common treasure and heritage for all, that we should look after for future generations, will be met with the unwavering commitment of our officers to enforce the law.”