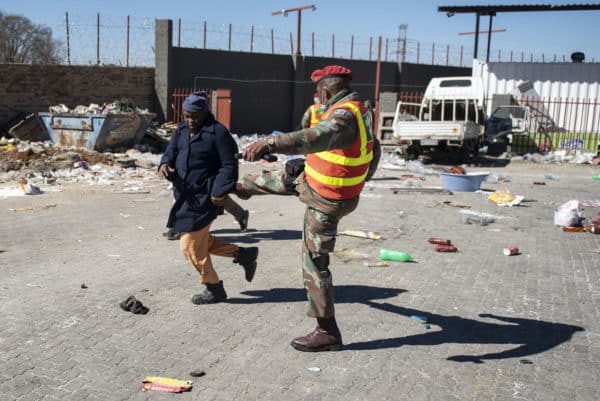 A member of the SANDF Military Police clashes with looters in Dlamini Extension 5, Soweto, trying to keep them away from the Supa Store supermarket, 13 July 2021. Shopping centres, malls, and stores have been looted across Gauteng and KwaZulu-Natal for a number of days, allegedly linked to former president Jacob Zuma's imprisonment. Picture: Michel Bega

The South African Police Service said on Sunday that 3 407 suspects have been arrested, on various charges including looting, since the violence erupted over a week ago, with only one suspect granted bail.

Spokesperson, Major General Mathapelo Peters said in a statement that the National Joint Operational and Intelligence Structure (NatJOINTS) co-chaired by the SANDF, SAPS and the SSA, have welcomed the influx of calls and tip-offs received via the MySAPS app from various communities in both KwaZulu-Natal and Gauteng.

This has resulted in the recovery of large numbers of suspected stolen property whose value is yet to be determined, she said.

“By this morning a total of 3 407 suspects had been arrested on various charges since the violence erupted over a week ago, with only one suspect granted bail, 1 122 expected to appear in different courts in the two most affected provinces, and the remaining dockets under investigation,” the statement read.

With the recent acts of unrest and opportunistic criminality, Peters says the tensions now appears to be simmering down.

“Security forces have embarked on recovery operations with the collaboration of citizens who have gone out of their way giving tip-offs to the police, and some cleaning up their streets and business premises that were affected by the looting in the past week,” Peter said.

The police have given a warning to those who were not part of the looting spree but are buying stolen property from the looters. “They too will be arrested for being in possession of stolen property.”

A further 92 suspects have been arrested over the weekend for being in possession of stolen property in KZN.

NatJOINTS reiterated for people to refrain from “inciting violence by creating and circulating inflammatory messages that seek to do nothing but elevate the levels of tension, confusion and fear amongst communities.” Three suspects were arrested on allegations of creating and circulating inflammatory messages with the potential of inciting violence. Two in the West Rand and one other a 21-year old woman was arrested in Duduza in Ekurhuleni District

Peters concluded: “JOINTS has subsequently mobilised maximum resources to address these threats and heighten visibility. Measures have also been put in place to ensure stability and the protection and safety of those who are not involved in the unrest and wish to go on with their daily routine.”

Soldiers could be deployed to assist police on voting day, says Bheki Cele
1 week ago
1 week ago
PREMIUM!

Soldiers could be deployed to assist police on voting day, says Bheki Cele
1 week ago
1 week ago
PREMIUM!