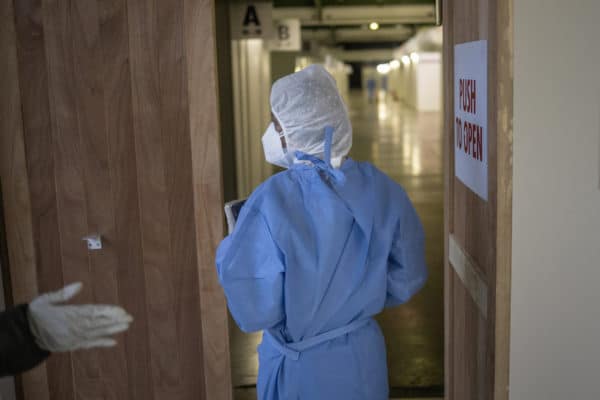 A healthcare worker wearing personal protective equipment (PPE) walks towards one of the temporary wards dedicated to the treatment of possible COVID-19 coronavirus patients at the Nasrec Field Hospital in Soweto. Photo: APP/Michele Spatari

The Special Investigating Unit (SIU) has welcomed the dismissal of a senior Gauteng Department of Health official for her role in the irregular awarding of COVID-19 Personal Protective Equipment (PPE) contracts.

The official, Thandiwe Pino, Chief Director: Supply Chain and Asset Management in the department, has been dismissed following an internal disciplinary hearing.

Last year, the SIU investigated allegations of maladministration, greed, nepotism and corruption in the appointment of service providers by the Gauteng Department of Health (GDoH) to supply PPE and related goods and services.

The allegations were referred by the Office of the Premier in Gauteng in March 2020 and later formed part of Proclamation R23 of 2020, which authorised the SIU to investigate allegations of impropriety in connection with the affairs of all State institutions.

Part of the allegations received stated that Royal Bhaca Projects was irregularly awarded a contract to the value of R125 million by the GDoH to supply various PPE items due to its Director’s close proximity to the MEC of GDoH, Dr Bandile Masuku.

It was also alleged that Ledla Structural Development (PTY) Ltd, a company with links to Royal Bhaca, was appointed by the GDoH to provide PPE to the value of R139 million.

Another aspect to be investigated was that the department awarded Beadica 423 cc a R68 million PPE contract. Included in the products to supply were surgical masks, N95 face masks and FFP2 face masks.

An SIU investigation revealed that proper procurement processes were not followed in awarding contracts to the three entities by Chief Financial Officer, Kabelo Lehloenya and Pino.

Lehloenya resigned when the allegations surfaced. The SIU was subsequently granted a preservation order by the Special Tribunal to freeze her pension benefits, pending the finalisation of civil action against her.

In line with Section 5(7) of the SIU Act 74 of 1996, the SIU referred to the GDoH evidence in support of the institution of disciplinary action against Pino for alleged contraventions of, inter alia; Section 217(1) of the Constitution, Section 38(1)(a)(iii) of the Public Finance Management Act (PFMA); the Preferential Procurement Policy Framework Act: Regulations; Sections 45(a) to (e) of the PFMA; relevant National Treasury Practise Notes; the Supply Chain Management (“SCM”) Policy/ies of the GDoH, and her failure to adhere to the Code of Conduct of the Public Service.

The GDoH actioned the referral by the SIU and instituted disciplinary charges against her.

“The SIU provided evidence and support at the disciplinary hearing. The SIU was informed that Ms Pino was found guilty on the disciplinary charges and a sanction of dismissal was made,” said the SIU.

The SIU said the sanction meted against Pino was a clear demonstration of the implementation of SIU referrals for disciplinary action.