A Golden Arrow bus driver was shot in the mouth near Borcherd's Quarry as violence continued. 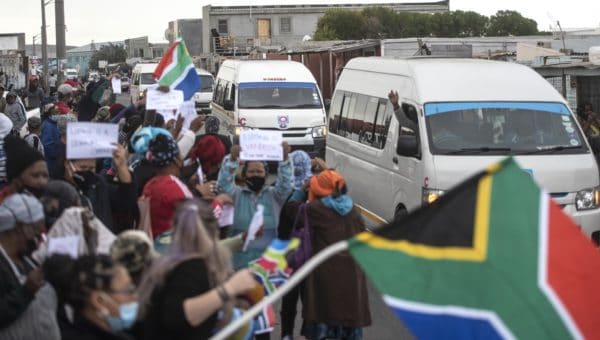 There seems to be no end in sight to quell the ongoing taxi violence gripping Cape Town as thousands of commuters – including Golden Arrow commuters – are forced to make alternative transport arrangements.

“MORNING UPDATE: We continue to operate very limited services. It is still advised that you make alternative arrangements if possible. Further updates will follow as the morning progresses”, the service said on social media.

“It is simply unacceptable that a dispute over routes is now undermining the well-being and safety of our residents, and we will not allow this violence to continue,” Winde said.

He added the Provincial Joint Operations Centre had been activated to specifically address the violence.

“I used the opportunity to express my grave concern at how a few criminal elements in the industry are holding our province hostage and urged maximum focus by SAPS in ensuring all those responsible are brought to book, and for safe operations to continue.”

Winde also announced the province’s intention of pursuing an interdict in the Western Cape High Court against illegal operations by taxi associations along disputed routes, as well as the gazetting of an intention to close certain routes, in terms of national legislation.

“In terms of this law, this is not an immediate step, and there must be a process of public comment, and due consideration applied by the provincial minister before any decision is taken,” he said.

On Monday, a Golden Arrow bus driver was shot in the mouth near Borcherd’s Quarry as violence continued.

The gunmen also fired on passing cars near the Langa taxi rank in a bloody start to Monday for commuters and taxi operators.

In that shooting, two suspects, aged 45 and 55, were arrested.

In a statement, Golden Arrow Bus Service said: “Our drivers are scared and many of them are not willing to get behind the wheel and we understand this.

“This means that we have no idea what operations tomorrow will look like and unfortunately it is impossible to predict which routes and times will be affected.”

No resolution has been reached after discussions with various stakeholders that include Transport Minister Fikile Mbalula and taxi bosses from the SA National Taxi Council, Cape Amalgamated Taxi Association and Congress of Democratic Taxi Association.