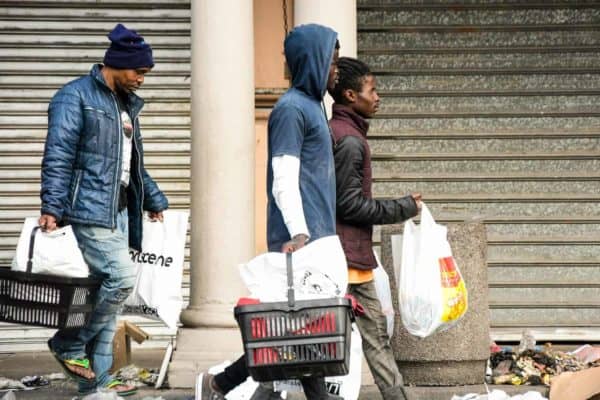 Looters walk home in the Durban CBD during the recent protests in the province. Photo for illustration: Gallo Images/Darren Stewart

Two more suspects accused of being involved in widespread public violence that took place in parts of Gauteng and KwaZulu-Natal in July have been arrested.

According to a media statement issued by the Directorate for Priority Crime Investigation (Hawks) on Sunday, a 35-year-old man from KZN and a 36-year-old woman from Gauteng are due in court on Monday.

The suspects, who face incitement to commit public violence charges, were arrested on Saturday in both provinces.

The suspect from KZN was said to have been responsible for the looting and setting alight of the Brookside Mall in Pietermaritzburg.

This after the man allegedly was found to have incited violence on social media platforms.

The mall was ransacked and set alight.

He will be appearing in the Pietermaritzburg Magistrate’s Court on Monday.

The Gauteng suspect, a woman with an avid Twitter following known as Sphithiphithi Evaluator, was arrested during a search and seizure operation in Leondale, the Hawks confirmed.

The woman is expected to appear in the Palm Ridge Magistrate’s Court on Monday.

“Investigations against those who incite, instigate or conspire with others to commit crime including public violence are continuing”, the Hawks’ statement concluded.