Cele previously said the police were looking to find the masterminds who had ordered the hit on Deokaran. 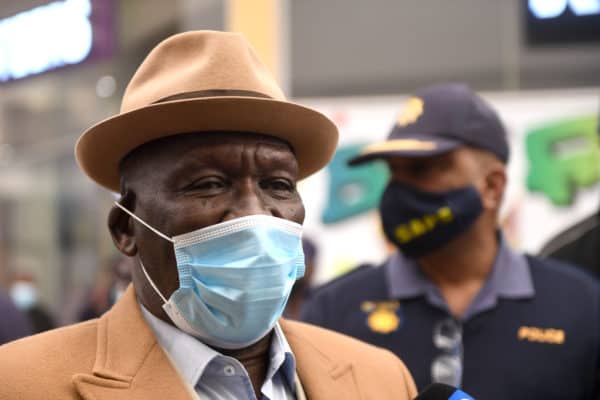 Police Minister Bheki Cele has confirmed that two more arrests have been made in Babita Deokaran’s murder case.

Speaking in Umlazi on Thursday, following the killings of 11 people in less than three days, Cele gave an update Deokaran’s murder investigation.

Cele said two more suspects were arrested, while a firearm was also seized by the police.

“One is happy to see [that] the investigation is progressing well. Two more people have been arrested with two cars and one firearm [have been confiscated],” he told the media.

The minister said the suspects were also found in possession of an unspecified amount of cash.

“Interestingly, it looks like they have been arrested with a lot of cash in their cars. So the story was that, that was an expensive exercise, where people are getting a lot of money each to pull the mission of killing Babita.

“[Now that the suspects were found] with raw cash, I hope that [they] will be able to tell us where the cash came from,” he added.

Deokaran, who was a senior finance official at the Gauteng health department, was gunned down last week Monday outside her complex in Mondeor, south of Johannesburg, shortly after dropping off her child at school.

She later died in hospital, with her funeral being held in KwaZulu-Natal last Thursday.

She was among the Special Investigating Unit’s (SIU’s) witnesses into its investigations into contentious multimillion-rand personal protective equipment tenders in Gauteng.

Search on for masterminds

Last Friday, Cele said the suspects alleged to be behind Deokaran’s murder were hitmen.

The minister said the police were looking to find the masterminds who had ordered the hit on Deokaran.

While seven suspects were initially arrested in connection with Deokaran’s murder, six men made their first appearance in the Johannesburg Magistrate’s Court on Monday.

The seventh suspect could not be linked to evidence, according to National Prosecuting Authority (NPA) spokesperson Phindi Mjonondwane.

The suspects are facing charges of murder, attempted murder, conspiracy to commit murder and possession of an unlicensed firearm.

The charge of attempted murder relates to a domestic worker who was with Deokaran at the time of her shooting.

Gauteng Hawks spokesperson Carol Mulamu previously confirmed that the witness was in a safe house.

Their case was adjourned to 13 September for a formal bail application.