Police are on the hunt for two more suspects, who tried to rob a family on the R80 highway as they were changing their car's tyre. 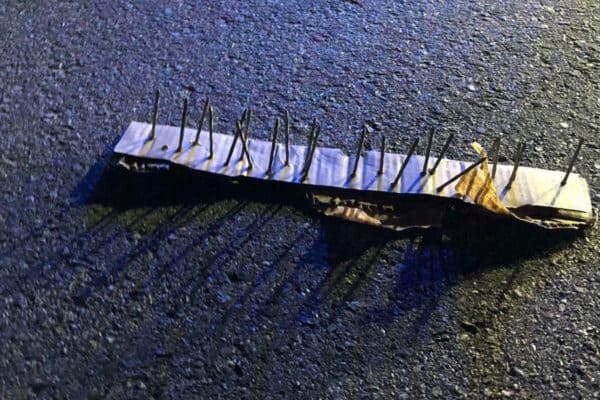 The latest device used in a spiking incident in Pretoria. Photo: Twitter/@SAPoliceService

Police have issued a reminder to motorists to remain vigilant, after yet another incident of motorists being attacked after their tyres were punctured by spikes placed in the road.

According to a statement issued by the SAPS, a family was attacked by three men on the R80 highway in Akasia on Friday evening at approximately 21:00.

The victims apparently stopped to change their car’s tyre after hitting what they suspect were spikes place on the road.

Update: The driver was reportedly an off-duty police sergeant stationed at Lenseria Airport ORS unit. When the criminals opened fire, the officer drew his service pistol and returned fire.

Also Read: ‘Hunt is on’ for Gauteng road spike gangs

“It is alleged that as the driver was changing a wheel with the wife standing on the side, they were attacked by three armed men who fired shots at them,” the statement reads.

“The husband shot back and one suspect was hit on the upper body while the other two fled on foot. Members of Flying Squad who were part of Operation O Kae Molao conducted in Akasia and Garankuwa responded promptly and a replica firearm was recovered at the scene, next to the shot suspect who was later certified dead by paramedics.”

Police are on the lookout for the dead suspect’s accomplices, and have warned motorists on the R80 to be careful, especially when driving at night.

Also Read: Road spiking incidents on the rise – here are the hotspots

Police say they have managed to curb incidents of car spiking in Gauteng on previous hotspot roads, especially on the N4 highway and R566. However, as soon as hotspots are identified and police visibility increases, criminals simply move to new locations.

“If motorists suspect that their tyre punctures are as a result of having driven over spikes, they must immediately alert the police by calling the SAPS emergency number 10111, scanning their immediate environment and by staying vigilant while changing their tyre but they feel unsafe then they must try to drive to the nearest filling station or police station.”