'Bheki Cele's reaction is typical from all politicians. They tell you that they bled for this country, they are our Lords and we must shut up.' 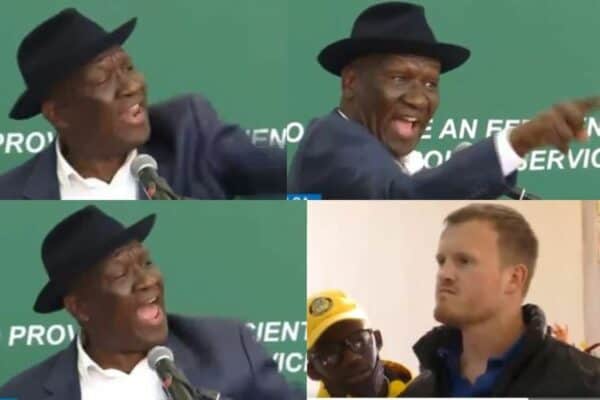 Screengrabs of video aired on eNCA, edited by Narissa Subramoney.

Did Police Minister Bheki Cele get what was coming to him?

Cameron called out Cele for ‘politicising crime’ saying that victims want justice and ordinary South Africans who are affected by high crime rates don’t care about his comments on the constitution and devolution.

Cameron was referring to Cele‘s response to calls from Western Cape leaders for the South African Police Service to be managed at the provincial level.

His comments clearly rubbed Cele up the wrong way, who’s been under constant fire since last year’s July riots and most recently the Enyobeni tragedy, in which 21 children were killed in a tavern in the Eastern Cape.

Cameron was then forcefully removed from the venue by the police.

Speaking to Bongani Bingwa on 702 Radio on Wednesday, Cameron said Cele needed to “grow up”.

So far, support seems to be tilted in favour of Cameron who threw down the gauntlet to Cele and challenged him to walk the country’s high-risk crime areas in plain clothes, as an ordinary citizen, before politicising crime.

Meanwhile, Cele will be attending the mass funeral for the 21 children who lost their lives at the Enyobeni Tavern back in June.

Speaking to reporters at the Scenery Park Sports Field in East London on Wednesday, the police minister said he was there to mourn the tragic loss and would not be discussing the investigation into the deaths.

Cele, however, confirmed that he received the report, but added: “It will be dealt with when other reports have been finalised. The less said the better.”

The Democratic Alliance (DA) welcomed Ramaphosa’s decision to terminate former National Police Commission Khehla Sitole’s employment but said he “must follow suit if the president is serious about starting the hard work of rebuilding trust and credibility” in the South African Police Service (Saps).