'We must also have multifaceted pupils. We want you to be a generation that says ‘I don’t earn a salary, I pay salaries’.' 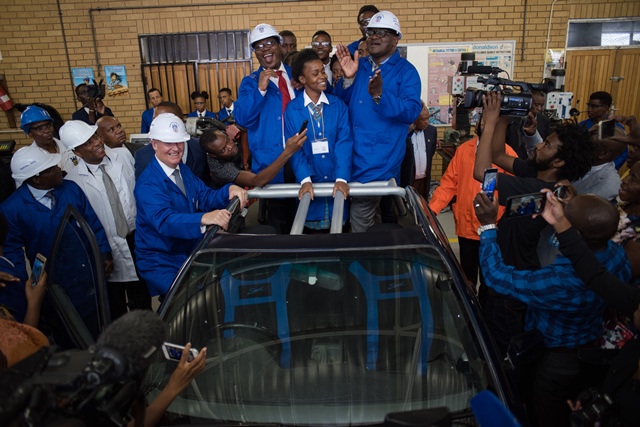 Soshanguve Technical High School pupils will in future be able to walk away with a matric certificate and the knowledge to assemble a car from scratch, honed through practice on a German luxury car.

Gauteng MEC of Education Panyaza Lesufi officially relaunched the school as an engineering specialisation school, with a particular focus on automotive engineering, yesterday.

Some of the school’s grade 12 pupils have already been practising their mechanical engineering skills, having rebuilt a BMW and a go-cart.

The BMW, which was involved in a collision, received a facelift and was converted into a bakkie, with a new engine and parts installed by the pupils in just three weeks.

“We would knock off at 8pm and come on Saturdays from 8am to 6pm.

“We learned all of these skills from our teacher because we do mechanical automotive engineering, so the knowledge we gained daily helped us put this together,” said Nkhangweleni Magari, 17.

After the addition of shock absorbers, thermostat housing and water coolant pipes, the vehicle now roars like a high performance car.

“I have always been interested in motion and always wondered how a car moves.

“Rather than just enjoying the ride, I was interested in mechanical engineering,” said Phumlile Wiso, who also worked on the exterior of the car and its finishing touches.

The Gauteng education department initiated the establishment of schools of specialisation in response to the skills shortage and unemployment among the country’s youth.

Partnering with BMW South Africa, the pupils were given an X3 for educational purposes while getting support and training services from the car company.

“Gone are the days of children chasing a one dimensional certificate called a matric.

“We must also have multifaceted pupils. We want you to be a generation that says ‘I don’t earn a salary, I pay salaries’.

“To be a generation that tells government to keep their RDP house because you will build your own house,” Lesufi said.