The school initially said the gesture was a 'Roman salute' and has now apologised for the 'additional offence that has caused'.

The principal of Somerset West Private School (SWPS) on Thursday apologised unreservedly for three former students who did a Nazi salute, as well as acknowledging that referring to the gesture as a “Roman salute” was “misjudged”.

News24 reported on Wednesday that scores of South Africans were outraged after a photograph on the school’s homepage showed three members of the 2018 class holding their arms up in the fashion of a Nazi salute.

The photo has since been replaced by a similar class photo with more formal poses.

Principal Morné Coetzer denied at the time that the pose was a Nazi pose, instead inferring that it was a “Roman salute”, without giving any reason for why the pupils posed in that manner.

On Thursday, in response to questions from News24, Coetzer sought to set the record straight.

He said the photograph had understandably caused widespread public outrage.

”We apologise unreservedly to the public at large, and all groups and individuals that were victims of the holocaust. We also acknowledge that referring to the gesture as a ‘Roman salute’ was misjudged and we apologise for the additional offence that has caused,” he said.

Coetzer said the school recognised “that just like other symbols of oppression, the Nazi salute has absolutely no place in society. The Holocaust was a heinous crime against humanity and we should never ever forget the pain and suffering it caused to millions of people”.

”The posting of the photograph was done with no ill-intent, and certainly was not aimed at offending anyone. However, we understand that this is little comfort to those that were offended and hurt by the image.”

He said the school did not tolerate any action or practice that impaired the dignity or rights of others. They were committed to creating a school environment that was tolerant and respectful for all.

”As [an] immediate action, we undertake to educate the former learners depicted on the photograph, as well as our current learners and staff about the offensive nature and insensitivity to the use of Nazi imagery and symbolism,” said Coetzer.

”Today more than ever we have come to realise that prejudice and marginalisation of any group is unacceptable and goes against the grain of our cherished Constitution.”

On Thursday, Coetzer met with the Directors of the Cape SA Jewish Board of Deputies (SAJBD) and the Cape Town Holocaust and Genocide Centre.

“We have accepted and committed to their offer for our learners, educators and parents to visit and engage in an educational program at the Cape Town Holocaust and Genocide Centre.”

Prior to the meeting, SAJBD Cape Board Executive Director Stuart Diamond emphasised that while Jews, as the primary victims of Nazi tyranny, were particularly sensitive regarding displays of this nature, the incident was ”something that concerned all South Africans”.

”With the increasing racism and hatred being spread in South Africa, especially on social media, it is incumbent on our schools to inculcate in their students, future citizens of our country, respect for others and an avoidance of any symbols and gestures that could indicate an identification with racist ideologies,” said Diamond.

SAJBD Cape chairperson Rael Kaimowitz, said ”the intention of the students concerned was clearly to emulate the infamous ‘Heil Hitler’ salute universally associated with the regime of Nazi Germany and that there could be no excuse for this”.

”We do not accept that such behaviour can be brushed aside by claims that it was ‘only a joke’ or no more than a display of ‘youthful high spirits’.

”Regardless of what the intention might be, those who make Nazi salutes are in practice publicly identifying with a hateful, ultra-racist ideology that resulted in the greatest genocide of modern times,” said Kaimowitz.

Coetzer concluded his apology by saying that they were “committed to ensuring that all our learners leave with the knowledge, understanding and empathy to not only avoid a situation like this in the future but to be active participants in making South Africa a better and more tolerant country to live in”.

Note: The faces of the pupils have been obscured because The Citizen abides by the  SA press code, which states that in the spirit of the Bill of Rights, minors (aged 18 and under) cannot be identified without the consent of a parent or legal guardian. 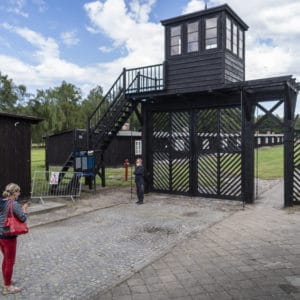 Ex-Nazi guard, 100, refuses to discuss atrocities at trial
3 weeks ago
3 weeks ago

Ex-Nazi guard, 100, refuses to discuss atrocities at trial
3 weeks ago
3 weeks ago