The department says it recommends that its workers get vaccinated, however, at no stage does it seek to compel them. 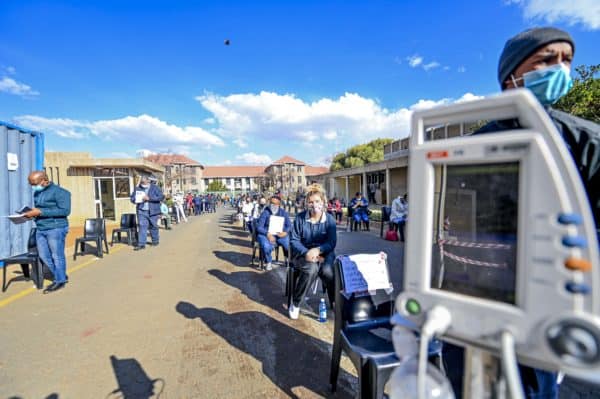 People queue in line for the Covid-19 vaccination at Universitas Hospital on June 24, 2021 in Bloemfontein, South Africa. It is reported that the COVID-19 vaccination of teachers and support staff started on June 23rd and will end on July 08 and all school staff will qualify for the jabs. (Photo by Gallo Images/ Volksblad/Mlungisi Louw)

The Department of Basic Education (DBE) has dismissed reports claiming that school teachers who refuse to take the Covid-19 vaccine will lose their jobs.

In a statement, the department said it had noted reports regarding a circular it had distributed to schools last week, adding that these reports were “misleading and misinformation”.

“The ‘no jab, no job’ narrative emanating from an article carried in a Johannesburg-based newspaper earlier this week has seemingly created confusion and fear among educators.

“The department is also aware that an extract from the seven-page circular has been shared on social media platforms resulting in unnecessary anxiety and panic among teachers who did not vaccinate.”

The department clarified that the circular – which was signed by the director-general, Mathanzima Mweli – was distributed in an effort to provide guidance regarding the operational requirements for teachers employed in terms of the Employment of Educators Act of 1998, following the implementation of the sector’s vaccination programme.

“The circular also serves as a guide to managing vulnerable employees in the context of the current pandemic.”

This was in preparation of the reopening of schools for the third term of the academic calendar year.

Learners and teachers returned to their classrooms on Monday, while school management teams and support staff were at work from last Thursday.

The department said it recommended that its workers get vaccinated, however, at no stage did it seek to compel them.

“In fact in the circular the department says that ‘it respects the rights of educator who opt not to be vaccinated on constitutional, religious, cultural, comorbidity or medical grounds’.”

Over half a million vaccinated

The department indicated that while more than 500,000 teaching staff had already been vaccinated, 65,000 others did not get the vaccine due to various reasons.

“At the close of the vaccination programme in the sector more than 517,000 education personnel out of 582,000 had received their vaccines. Others could not get vaccinated because of various reasons including illness, Covid-19 positive cases, flu vaccines and hesitancy.”

READ MORE: Vaccine hesitancy: Is avoiding the jab a gamble you should take?

The department further said teachers who opted not to get the vaccine, or were concerned about their comorbidity or illness, should apply to the relevant provincial departments for leave.

It added that the teachers would be dealt with according to leave and sick leave provisions, in terms of the Employment of Educators Act.

During his address on Sunday night, Ramaphosa announced that people over the age of 18 would be allowed to get their Covid-19 vaccines from 1 September, in addition to the age groups currently eligible for vaccine registrations and walk-ins.

Ramaphosa said an additional 31 million doses vaccines would be delivered within the next three months, while the sourcing of vaccines from other manufacturers was also under way.

At this rate, deputy director-general of the department of health, Dr Nicholas Crisp, said South Africa would be “able to have vaccinated, at least one dose, 35 million people before Christmas”.

To date, more than 6.8 million people have been vaccinated in South Africa, with 240,000 daily jabs being administered.