The most expensive IEB school, Hilton College, obtained a 100% pass rate and of the 106 pupils who wrote the IEB exam, 96% of them received a Bachelor's pass. St Stithians College Matric Class of 2020 student Tadiwa Murewa signs his signature on the 'All Banner' in Johannesburg, 19 February 2021, after receiving their results. Picture: Nigel Sibanda

It is said you cannot put a price on a good education, but the country’s five most expensive schools certainly try, with their 2021 fees all above R290,000.

Here is how they performed in the 2020 Independent Examinations Board (IEB) matric results.

The school, located in KwaZulu-Natal’s Midlands, obtained a 100% pass rate and of the 106 pupils who wrote the IEB exam, 96% of them received a Bachelor’s pass.

The school’s top achiever, Hlumelo Notshe, received nine distinctions, eight of which earned him a spot in the top 1% of the subject.

He and fellow pupil, Murray Dorward, also received an IEB outstanding achievement which is awarded to pupils who achieved within the top 5% in six or more subjects and achieved a rating level of 7 in Life Orientation.

Located further into the KZN Midlands, Michaelhouse obtained a 100% pass rate with an impressive 99% of the pupils getting a Bachelor’s pass.

The school’s Dux, Tapiwa Chikwanda, bagged eight distinctions and had an aggregate of 93.4%.

The Makhanda school received a 100% pass rate with 74 of the 75 pupils obtaining a Bachelor’s pass.

The school’s Dux and head boy, Jonathan Shamwana, bagged seven distinctions and an 89% aggregate. Philip Beynon, who got six distinctions, was in the top 1% for Geography.

The Johannesburg school received a 100% Bachelor’s pass rate and 265 distinctions from 76 pupils, with 48% of all subject results being distinctions.

Rounding out the list, the Johannesburg school also received a 100% pass rate with 98% of the pupils receiving a Bachelor’s pass.

The school’s 126 matrics had 357 distinctions between them. Top achiever Andy Qu had an average of 96.4% and eight distinctions. He also received an IEB outstanding achievement. 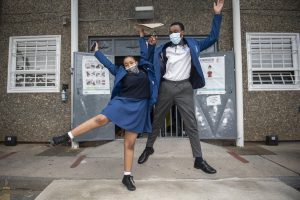