Limpopo granny is a true fighter for the EFF at 108

Modjadji Maria Rasebaka is leading the door-to-door election campaigns in Seshego township outside Polokwane for the EFF ahead of the May 8 polls. 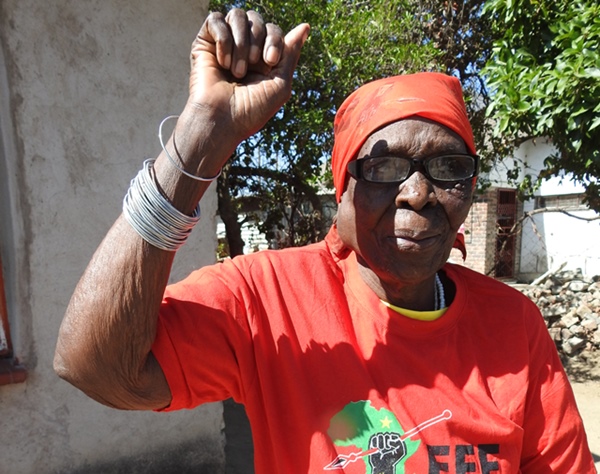 A Limpopo grandmother, clad in red colours from head to toe, is showing that one does not have to be a youth to be a firebrand fighter for economic freedom.

At 108 years, this granny is not only still extremely active but is leading the door-to- door election campaigns in Seshego township for the Economic Freedom Fighters (EFF) ahead of the May 8 polls.

Born Modjadji Maria Rasebaka in Ga-Dikgale, outside Turfloop, on March 11, 1911 “The Giant of the EFF”, as she is affectionately known in the area, relocated to Seshego Zone One with her husband in the early ’70s.

Unlike many rural and township senior citizens, Rasebaka begins her day at 6am taking a 1km walk, she says.

“I take a walk every morning to prevent myself from being attacked by opportunistic diseases such as flu, stress, obesity, insulin resistance, metabolic syndrome, hypertension and strokes,” she said.

When The Citizen visited her at her Zone One home on Tuesday morning, she had already taken a walk to the shops where she usually queues for a bunny-chow – her occasional breakfast treat.

Rasebaka said her secret to remaining strong and active lies in her diet.

“I don’t eat anything just for the sake of taste. I am selective and choosy. I prefer traditional food over modern eat.”

The granny, a mother of one and grandmother to five, said she prefers soft porridge or brown bread for breakfast, and vegetables and potatoes with brown porridge for lunch.

“I rarely eat meat because during our youthful days, meat was for men. Women were fed milk,” she said. “During my days there was no pizza, no burger, and no sushi. That is why we grew up strong and active throughout the years.”

Seshego is a bustling township located just a breathtake away from Polokwane central business district.

The township is also a melting pot of student and community politics and the hometown of EFF’s commander-in-chief Julius Malema.

A fortnight ago, ANC president Cyril Ramaphosa campaigned for votes in the township where he called the EFF “brakkies [puppies] that claim to be the government in waiting”.

The governing ANC leads with numbers in the Limpopo legislature with 39 seats, followed by the EFF with six, the Democratic Alliance (DA) three, and Congress of the People one.

Many in the Limpopo province believe that the ANC will remain in power after the May 8 national and provincial elections, but Rasebaka begs to differ.

The 108-year-old says during her campaigning in Seshego for the EFF, she has spoken to several pensioners about their views on the political landscape.

She said most of “these youngsters”, referring to the older citizens, have become cleverer than they were in 2014.

Rasebaka believes the EFF was not only the party of the future for her, but for the rest of the country.

“When I die, my blanket should be red like my blood.

“My coffin should also have a red line and my president Julius Malema should speak at my funeral.”