The EFF has written to the IEC to demand a detailed technical report on the submission of party candidate nomination lists. The Economic Freedom Fighters (EFF) will contest all 257 municipalities in the country in the upcoming local government elections.

EFF leader Julius Malema made the announcement on Wednesday during a press conference in Johannesburg.

“The EFF confirms that we will be contesting all the local, district and metropolitan municipalities in all the 4,468 wards in the upcoming local government elections,” Malema said.

He said they had convened rigorous branch general assemblies nationwide to elect capable ward candidate councillors ahead of the polls, scheduled to take place on 27 October 2021.

He said while the EFF believed that South Africa was not ready to hold free and fair municipal elections due to the lockdown and restrictions on gatherings, they were not sure whether all other political parties had complied with the IEC’s deadline.

“We have since written to the IEC to demand a detailed technical report on the times each political party submitted candidates for local government elections,” Malema said.

“We did so because the rules and timetables for elections must be adhered to by all political parties. We call on the IEC to be honest because its independence and autonomy seems to be disappearing under the current leadership.”

The IEC on Tuesday said a total of 276 political parties had submitted their candidates, of which two will contest in all the 257 municipalities in the country. A total of 10,285 municipal council seats will be contested in the election.

Last Friday, the Constitutional Court (ConCourt) reserved judgment on the IEC’s urgent application seeking the postponement of the local polls to February 2022.

EFF will ‘give most formidable fight’

Despite the EFF calling for the postponement of the elections, Malema said the EFF was currently at its strongest position and would “give the most formidable fight” in the local elections.

“We call on all our branches to immediately continue with the hard work of campaigning for total victory in all the wards,” he said.

Malema said the official launch of the EFF’s election manifesto would take place on 26 September in Johannesburg and would be based on massive public consultations.

“The launch of the manifesto will proceed even when elections are postponed to a further date by the Constitutional Court processes,” he said.

“After the launch of the elections manifesto, we will campaign for the total victory of the EFF and will not be restricted by any regulation which is aimed at suppressing our democratic right to campaign for the removal of incumbents from political office.”

The EFF said its branch command teams (BCTs) were expected to convene community meetings to introduce their ward councillor candidates.

The party said this would be done in order to seek guidance from members of different communities on their immediate issues and challenges. Those views would then be included in the manifesto.

“The immediate programme includes the public consultations and listening campaign where branches must listen to all members of their wards on what they want to see in the EFF elections manifesto for 2021 local government elections,” Malema said.

READ NEXT: How IEC has made it difficult for Concourt to reject an election delay 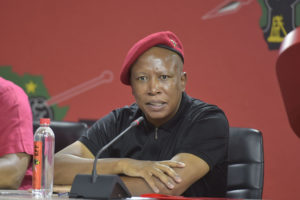