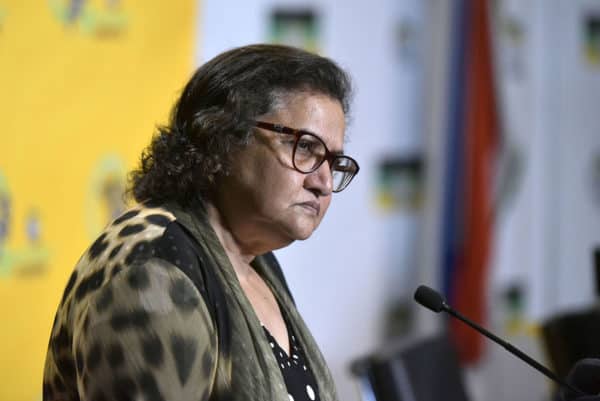 ANC deputy secretary-general Jessie Duarte briefs the media at Luthuli House, on 7 September 2021, on the outcomes of the recent lekgotla. Picture: Neil McCartney

The ANC on Tuesday strongly denied allegations that it had influenced the Independent Electoral Commission (IEC) to reopen the candidate registration process for the upcoming local government elections.

“We made no comments about what should happen with the IEC. We only hoped that the IEC would take the legal and democratic decision that they did do,” said ANC deputy secretary-general Jessie Duarte.

She dismissed claims made by some opposition parties, notably the Democratic Alliance (DA) and its federal council chair Helen Zille, that the IEC decided to reopen the process of submitting candidates “so that the ANC can fix its disastrous failure” to register candidates in more than 90 municipalities.

“We want to say that we reject the accusation being made that the ANC tried to influence the IEC or the Constitutional Court [ConCourt] in any way whatsoever. We did not and we cannot,” Duarte said.

On Monday, the IEC announced that it would reopen the candidate registration process after the ConCourt dismissed its application to postpone the municipal elections to February 2022. The apex court ordered it to deliver the elections between 27 October and 1 November.

The commission’s decision to reopen the candidate registration was slammed by most opposition parties, with the DA, the Economic Freedom Fighters (EFF) and the Inkatha Freedom Party (IFP) threatening to challenge the IEC in court.

In response to this, Duarte said the ANC would oppose whatever legal action that is taken that is “unproductive and negative” for the country’s democracy.

She said the ANC understood the decision taken by the IEC that the voter registration could not take place without the reopening of the process of submitting candidates to contest the elections.

Duarte said the ANC received no special treatment from the IEC whatsoever because they never lobbied the commission.

“We didn’t lobby at all. Our attitude was we will go to the PLC [ Party Liaison Committee] we’ll put our argument there, which we did.

“We took our argument where it mattered and that was in the PLC… we did not lobby and I want to insist on that.”

Despite the ANC blaming the IEC’s candidate registration system for it having missed the commission’s initial deadline to submit names, Duarte admitted the party had “procrastinated” in submitting its candidates even though the IEC had extended the cut-off time by four hours.

“I think what is the problem is that people procrastinated too late and too long. And when they knew that they were given four more hours, they should have jumped faster and not hoped and prayed and waited until the last minute.

“We have another window now and we’re praying that no one will come with any excuse,” she said.

ANC gearing for the local elections

Duarte said the ANC was already working towards realising a successful election. She said the party was not anticipating an “easy ride” and would work hard to secure the majority of votes in most municipalities.

“Our ambition is to win all the metros, including the Cape Town metro,” Duarte said.

She added that the ANC’s cash flow problems would not prevent the party from campaigning effectively.

“Yes, we don’t have money, but we are going to run this election with all the ANC volunteers on the ground…we’re still going to go door to door. That is the style of campaigning that we do. And of course, we are not going to have rallies because of Covid-19 regulations.”

Don’t write us off just because we don’t have money.

Duarte said the ANC would hold its strategy workshop for the polls on Sunday and Monday to finalise its “core message” for the elections.

READ NEXT:  ‘Zille should be ashamed of herself,’ says ANC as it explains electoral court withdrawal