Malema says there is no 'crooked arrangement by the EFF' to hide its funding sources. 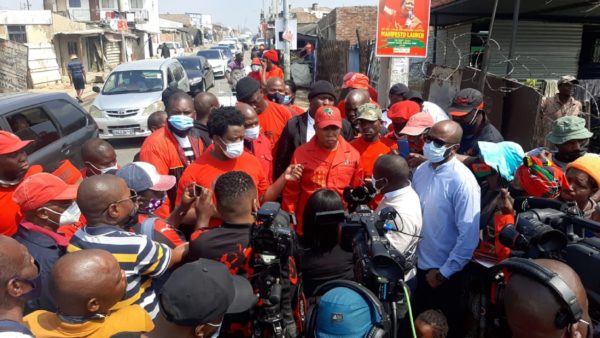 EFF leader Julius Malema is adamant his party did not declare its funding sources to the Independent Electoral Commission (IEC) because it did not receive any donations above R100,000 between April and June this year.

Malema on Friday said the Red Berets had no donations to declare to the commission becuase they were surviving through funds received from Parliament, the IEC and party levies.

“There is nothing to declare, they’re called donations. The EFF survived through the money of Parliament, through the IEC money and through party levies.

“Party levies are what our public representatives contribute every month and that’s what makes the EFF survive. There’s nothing that came into the EFF coffers that is more than R100,000,” the EFF leader said, speaking to journalists in Alexandra.

The IEC released on Thursday its first quarterly report on political parties’ donations received from donors, in accordance with the new Political Party Funding Act.

The EFF, South Africa’s third-biggest party, was among 502 political parties that did not disclose any donations as legally required by the Act, which regulates the funding of parties.

According to the Political Party Funding Act, donors and all registered parties are legally obliged to disclose to the commission donations above the R100,000 threshold in a year. And no donations may be made by a single donor above R15 million in a year.

Malema said the EFF had nothing to hide about its funding sources and the IEC would receive the party’s audited financial statements to prove this.

“We are going to be audited and the audited financial statements will be sent to the IEC for the commission to satisfy itself,” he said.

“The ANC, as you know, its got its own companies [and] its own corrupt-related individuals. So, they will always make contributions.

Malema also dismissed suggestions that there was any “crooked arrangement by the EFF” to hide its funding sources, saying even the IEC’s Multi-Party Democracy Fund failed to garner enough donations.

The fund received a single contribution from a member of the public, Paul Malcolm Graham. He made a contribution of R2,000 on 5 May.

“If the IEC, the most neutral institution, can’t get political funding from donors, what about a radical left political organisation that seeks to replace the ownership of the means of production by individuals, to ownership by the working class? No one will donate money,” Malema said.

The EFF leader was in Alexandra to encourage citizens to register ahead of the municipal elections set to take place on 1 November. He also put up posters of the EFF election manifesto launch, expected to take place at Gandhi Square in Johannesburg on 26 September.