The DA leader says his party doesn't want to rely on the support of other parties to run the City of Johannesburg. 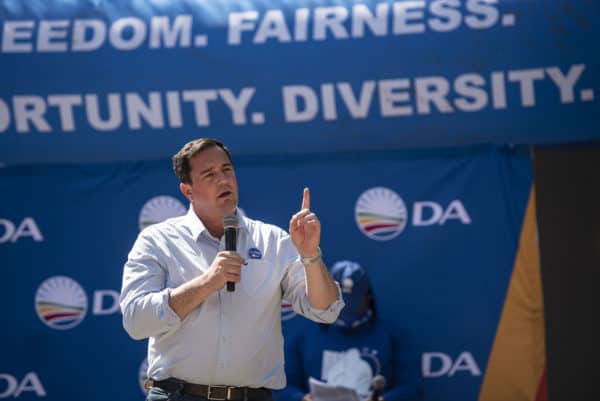 DA leader John Steenhuisen has called on Joburg residents to give his party an outright majority to govern the City of Johannesburg ahead of the local government elections.

Speaking at the launch of the DA’s election campaign in Braamfontein on Saturday, Steenhuisen appealed to voters to get behind the party’s mayoral candidate for the metro, Dr Mpho Phalatse.

Steenhuisen said Phalatse ticked every box to be the city’s next mayor because she would run an efficient and hands-on administration.

He said Phalatse had proven through her various roles – including during her tenure as the city’s MMC for health and social development – that she has “the heart to run a caring and humane administration.”

“All she and her DA colleagues need is enough of your votes.

“And by enough, I mean a clear mandate that doesn’t put the government at the mercy of those who don’t share this vision of a prosperous and caring city,” he said.

Steenhuisen said his party came close to getting an overwhelming majority in Joburg in the 2016 municipal elections. However, they had to rely on the support of the EFF to run the city for three years under Herman Mashaba’s mayorship.

He said the DA fundamentally disagreed with the EFF on many issues, leading to the party losing the metro to the ANC.

“But even more importantly, this was a party that did not share the DA’s core values of non-racialism, respect for the rule of law, the building of a capable state, and the power of a social market economy to create jobs and opportunities.

“We relied on this party’s support to remain in government, and because they knew this, they acted as if they were in charge,” he said.

Steenhuisen said the EFF started making demands that were not aligned with the DA’s idea of good governance, and in some instances, Mashaba’s administration gave in to those demands.

“In doing so, our party compromised some of its core values, and this reflected in the type of government we were able to offer the people of this city.

“I am here to tell you that we’ve learned a massive lesson from that chapter, and that lesson is this: We will never again take shortcuts and make compromises that jeopardise our party’s values just for the sake of remaining in government.

“We would rather be a strong, principled opposition than a compromised, ineffective government. Because the only thing worse than losing an election is winning an election and governing badly.”

Phalatse said the City of Johannesburg under the ANC government was broken, but it could be fixed again.

She said under her leadership the city would be dedicated to service delivery, and she would not compromise her party’s values and principles.

“We will fight to get the majority so that all residents of Joburg can enjoy uninterrupted service delivery and never have to worry about corrupt criminal parties seeking to steal the services that they deserve. This is what we are seeing right now,” Phalatse said.

This follows the dismissal of the Independent Electoral Commission’s (IEC’s) application at the Constitutional Court to postpone the polls to February 2022 due to the Covid-19 pandemic.

READ NEXT: ‘Bending to the ANC’: DA fires salvo at IEC over reopening of candidate registrations