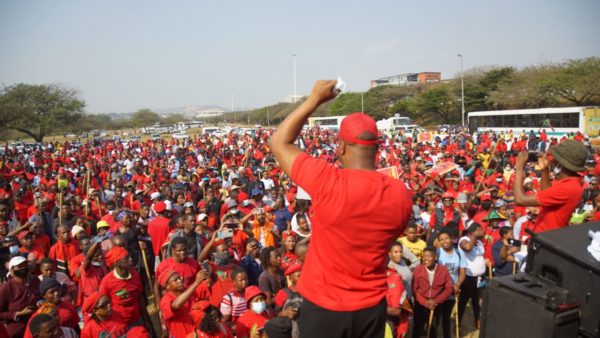 The Economic Freedom Fighters (EFF) on Friday warned of a scam doing the rounds on social media. No, the party is not giving away large sums of money.

The poster fails to mention why the party would give away half a million rand, or even how to enter, simply saying it’s an “Economic Freedom Giveaway”.

The scam poster was made using the party’s Manifesto Launch announcement, set to take place in Marshalltown, Johannesburg, on 26 September.

No fake news will prosper

The EFF said the account sharing the scam is in no way affiliated or associated with any EFF structures in South Africa.

“No fake news against us can stop us from victory in the 2021 Local Government Elections.”

No funds to declare

Party leader Julius Malema said earlier this month the EFF did not declare its funding sources to the Independent Electoral Commission (IEC).

He said the party did not receive any donations above R100,000 between April and June this year, and that there was “nothing to declare, they’re called donations”.

Malema added that the party “survived through the money of Parliament, through the IEC money and through party levies”.

While levies received from registered members keep the wheels turning, Malema said “there’s nothing else that came into the EFF coffers that is more than R100 000”.

Malema on the ANC, white people

At a separate briefing, Malema said Zuma and Ramaphosa factions could not be trusted to save South Africa, adding that the ruling party “is corrupt to its core”.

He said the ANC was comprised of “thieves who steal food parcels”. Malema told supporters that “white people will play with you”.

“This is our property, it is not private. [White people’s ancestors] stole this land. Stop threatening us that white people will leave. They can leave if they want.”

He said Jan van Riebeeck “found black people here” when he arrived in 1652″.

NOW READ: Tenders (and whites) must go as Malema slams ‘corrupt to the core’ ANC