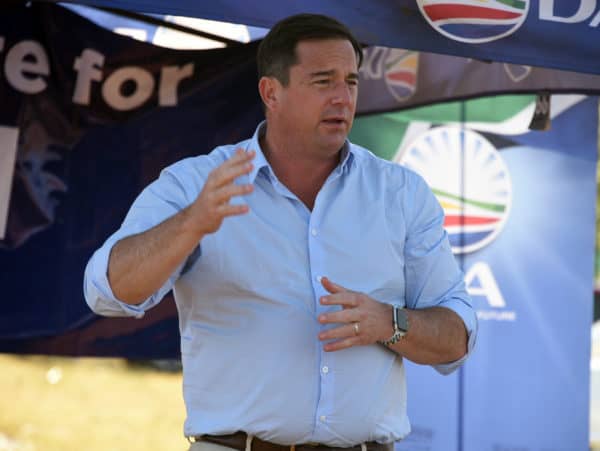 While accepting their defeat at the Constitutional Court (ConCourt) on the reopening of the candidate nomination process for the upcoming municipal elections, the Democratic Alliance (DA) on Monday maintained the Independent Electoral Commission’s (IEC’s) decision was skewed in favour of the ANC.

DA leader John Steenhuisen said his party would be watching the commission closely to ensure the 1 November local government elections are held in a free and fair manner.

“We are going to put the IEC on notice. We’re going to be watching them like hawks,” Steenhuisen said, speaking during a virtual press briefing.

“We simply remain of the view that they [IEC] made this decision to reopen the candidate nomination process to favour the ANC.”

The ConCourt dismissed the DA’s urgent application on Monday, finding the IEC’s decision to reopen the candidate registrations was not unconstitutional, unlawful and invalid because the commission was legally empowered to amend the election timetable.

The DA’s application for direct access was granted by the CourtCourt, but the application was dismissed with no costs order.

The official opposition had complained, saying the IEC’s decision unfairly benefited the ANC after it failed to meet the commission’s initial 23 August cut-off date to submit candidates. The ANC did not submit its party lists and ward candidate nominations in 20 municipalities and 598 wards.

At the centre of the DA’s application was the apex court’s ruling on 3 September, which dismissed the IEC’s bid to postpone the elections to February 2022 due to concerns over the Covid-19 pandemic.

At the time, the ConCourt instructed the IEC to explore the possibility of holding at voter registration weekend if it is “reasonably necessary”, but said nothing on the submission of councillor candidates.

‘DA case was based on merit’

Steenhuisen said the ConCourt’s judgment showed the DA’s case had merit and they were right to bring the case to the apex court.

“And that is reflected in the fact that no-cost order was granted against the DA. Obviously, it’s not the outcome that we wanted, but nonetheless, we respect the apex court and we respect the judgment made therewithin,” Steenhuisen said.

The DA leader said the IEC failed to follow its own precedent on barring parties that fail to meet its deadline on the submission of candidates like it did to the Inkatha Freedom Party (IFP) and the National Freedom Party (NFP) in previous elections.

“And had they followed the precedent that they had applied themselves in elections past to both the IFP and the NFP, they would not have reopened the electoral timetable.

“And we remain of the view that had it been the DA or any other opposition party that found itself on the wrong side of that timetable, that they wouldn’t [have shown the] same eagerness to overturn it,” Steenhuisen said.

He said the DA was now focusing its energy on the upcoming elections as the party had fielded candidates in all 278 municipalities in the country.

“The DA is for the first time in its election history fielding a candidate in every single ward in the country,” he said.

Meanwhile, the ANC welcomed the ConCourt ruling, saying it vindicated its position that the right of citizens to vote is inextricably linked to their right to stand for office.

“It also confirms the correctness of the support given to the IEC’s decision by the ACDP, AIC, Al Jama-ah, Cope, FF Plus, GOOD, PAC and the UDM. We call upon the DA to refrain from further attacks on the integrity of the judiciary and the IEC,” ANC national spokesperson Pule Mabe said in a statement.

Mabe said the ANC was ready to register all its candidates and abide by the IEC’s Tuesday deadline of 5pm.

“Our candidates have been selected through a rigorous, democratic and participatory process involving communities in the choice of who should represent them in local government, the sphere of government closest to the people,” he said.

“We call upon all citizens to give these ANC candidates an overwhelming mandate to continue working with them to build a better life for all.”

The ANC also called on all members and other political parties to observe the Electoral Code of Conduct and exercise maximum tolerance as they campaign for the elections.