One man, four political parties: Who is Loyiso Nkohla really?

Since parting ways with the ANC in 2014, Loyiso Nkohla has campaigned for three other parties, the latest being the Patriotic Alliance (PA) 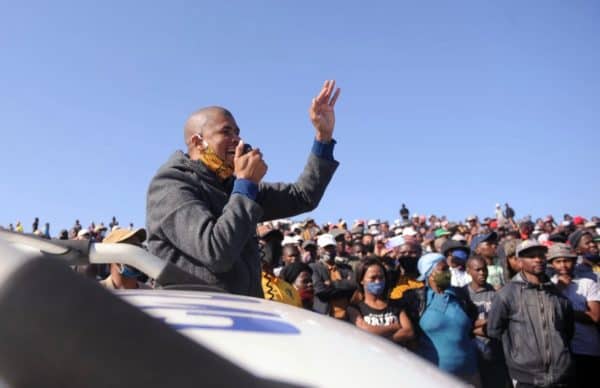 In his 39 years of existence, Loyiso Nkohla has held leadership positions in four political parties, having done most of his cross-overs in the last six years, and even becoming a meme for it.

He says his party-hopping can be explained by his love for his community.

“My loyalty is not with any party, my loyalty is with my people. My community,” he proudly declares.

Although he never held an official position in the Democratic Alliance, this was the first party to which he claims to have led over 1,000 people to switch support from the African National Congress (ANC) in the 2016 local government elections (LGE).

He later joined the Land Party in 2019 before quitting in a huff over the character of its leaders and now he is a candidate of the Patriotic Alliance for various wards in Cape Town.

Nkohla officially parted ways with the ANC in 2014. He has since campaigned for three other parties, the latest being the Patriotic Alliance (PA), where he is contesting as a councillor in the Cape Town metro.

During his early youth in the early 1990s, Nkohla would attend political meetings at Duncan Village in East London at the height of negotiation tension between the governing National Party, the ANC and other political organisations.

Nkohla began his political career in earnest in 2002, when he was elected as a deputy secretary in an ANC branch in Nyanga in Cape Town. He was 20 years old.

In 2008 he was elected deputy chair of the Dullah Omar region in Cape Town, and in 2011 he became an ANC councillor.

In 2013 he famously helped lead a protest against the controversial ‘bucket system’ in the DA-run metro. This would propel him to national fame (or infamy), for his and his comrades’ so-called poo protests.

It resulted in him being arrested for violating the Civil Aviation Act, after he and a few others were caught on camera dumping human waste at the Cape Town International Airport.

The poo protest, led by activists Andile Lili and Nkohla as the apparent second-in-command, also produced several videos of residents clashing with authorities, in attempts to dump buckets of human waste at the Cape Town International Airport and during another incident at the Parliament buildings in the metro.

After being expelled from the ANC in 2014, he helped found the Ses’khona People’s Rights Movement. He says around this time, the ANC’s provincial spokesperson, Jabu Mfusi, said Nkohla’s exodus from the party was “good riddance” because he was disrespectful to the law.

Nkohla explains his behavior during the sanitation protest by repeating his mantra that no matter how much power he is given, he will only use it to empower those who put him there. And use what he was given, despite the inconvenience, he did, as another infamous arrest during this period proved.

“I remember I was driving my Audi A4, which I had loaded with buckets, and the police stopped us,” says Nkohla.

He continued to advocate for informal settlement communities, the subject of his main beef with his former political home, he says.

Also Read:“Poo protesters” back in the ANC”

He accuses the ANC of not allowing informal settlement communities to have their representatives elected as councillors.

Under Ses’khona he and other leaders mobilised hundreds of shack dwellers who, at the time, still largely supported the ANC . In 2015, Nkohla claims national officials who joined the ANC campaign trail promised positive changes for the hundreds of vulnerable Cape Town communities, but failed to deliver them by the time of the 2016 LGE, during which he decided it was time to switch his support to the Democratic Alliance.

The poo protests were part of the events that changed Cape Town’s political history for good, because, after this, Nkohla claims he helped sway the votes of former ANC supporters to back the DA.

The latter had apparently made commitments to improve water and sanitation services in the city’s informal settlements. Whether Nkohla’s influence was the magic ingredient or not, the DA garnered a resounding victory in the 2016 election winning 154 seats to the ANC’s paltry 57 seats in council.

The Land Party was born when the 2019 national election was imminent and the debate around land expropriation had reached its boiling point in the political arena.

In Gauteng the Economic Freedom Fighters (EFF) were being blamed for the mushrooming of new squatter camps in previously vacant spaces, referred to by some as land invasions.

But on the other side of the country, Nkohla joined the newly formed Land Party,ostensibly to continue the fight for urban space for decent housing, proper sanitation and access to basic services. This relationship was short-lived despite being the 4th Candidate at Land Party’s national election List and in May, he resigned, citing rape allegations against the party’s leader Gcobani Ndzongana.

Nkohla says he consulted his supporters at Ses’khona and the communities they operate about which party to support this year, before deciding to join the PA. He’s met PA leader Gayton McKenzie a few times and is fond of the man’s leadership style and ideas.

“At first I was sceptical because you know the media is very negative about Kenny Kunene and Gayton Mckenzie being an ex convict and so on,” says Nkohla about his first encounters with the leaders of the PA.

“I was shocked when I met them at first to hear about his views about society at large. I realised that I am meeting a business person, an activist , a politician, but also an ex-convict who is very clear to say ‘I have never denied what I have done but I have taken my time, my resources to go around the country to let people know that crime has bad consequences.’ So, when you have someone like that, who are we to judge him?”