The ruling party has ensured hundreds of thousands of people were arrested thanks to unpopular lockdown regulations. 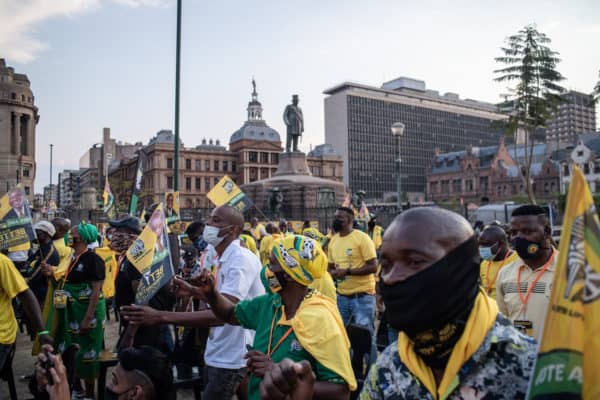 Although delegates at the ANC’s election manifesto launch in Church Square in Tshwane repeatedly said on Monday that they were keeping to the lockdown limits announced by President Cyril Ramaphosa, social media users were having none of it.

Accusations came thick and fast that the gathering was clearly in excess of the current adjusted level 2 lockdown regulations, which cap the legal limit for outdoor gatherings at 500 people.

The EFF faced much criticism for having far exceeded this limit at their own manifesto launch on Sunday at Gandhi Square in Johannesburg. However, the big difference there was that the EFF has publicly declared its opposition to the regulations and leader Julius Malema has called on his members to breach them.

For the ANC to do the same thing struck many as inconceivable, since it was the ANC government that had drawn up the rules, and many people were arrested and prosecuted for trivial infringements of state of disaster regulations.

Ramaphosa announces many of the regulations in his so-called family meetings and they are then gazetted by Minister Nkosazana Dlamini-Zuma. Police Minister Bheki Cele has enforced them with gusto, while being somewhat less enthusiastic about putting a stop to the rioting that broke out in July, partly due to the unemployment and hunger that the draconian lockdown helped to cause in the first place.

Take a look at some of the reactions on Twitter for yourself:

Zuma not under house arrest, so butt out, says daughter
31 mins ago
31 mins ago

Zuma not under house arrest, so butt out, says daughter
31 mins ago
31 mins ago