Parties ramp up the tempo in a final dash for votes

With a tight schedule in the Western Cape, Eastern Cape and Limpopo, Ramaphosa reserved Soweto and Alexandra for his last round of campaigning for votes. 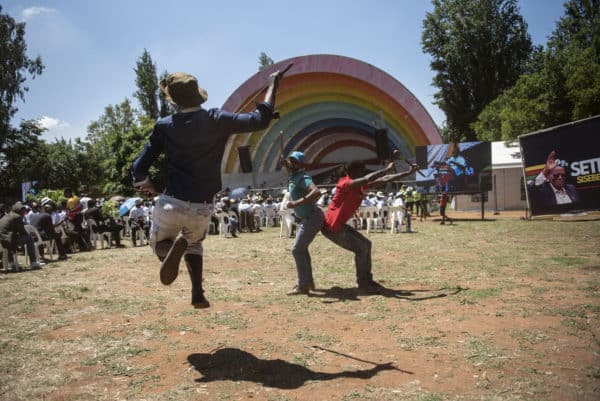 Supporters of the Inkatha Freedom Party (IFP) celebrate, 10 October 2021, at Mofolo, Soweto, before the start of the launch of the IFP Gauteng Manifesto, ahead of the local government elections. The manifesto launch was attended by IFP President Velenkosini Hlabisa. Picture: Michel Bega

Political parties have increased the tempo to attract voters ahead of Monday’s local elections – but the jury is out as to whether they will be able to convince an electorate, fed-up with political parties and their rot, to change their minds.

Alternatives abound, with an unprecedented number of independent candidates.

The ANC and Democratic Alliance (DA) are facing a further decline from the 2019 national election but indications are the Economic Freedom Fighters (EFF) will maintain its upward trajectory.

President Cyril Ramaphosa returned on Monday to Soweto, where he was previously almost shouted down by angry voters who were dissatisfied by shoddy service delivery by the ANC.

He was not only going there to plead for a second chance, but to ensure his party restored its weak power base in the Joburg metro, which it lost to a DAled coalition in 2016.

ALSO READ: Ramaphosa: Without accountability, trust in government is broken

With a tight schedule in the Western Cape, Eastern Cape and Limpopo, Ramaphosa reserved Soweto and Alexandra for his last round of campaigning.

EFF leader Julius Malema last weekend was in Mthatha in the Eastern Cape, where potholes have become dongas and street lights are off.

He promised the EFF will rescue the city from poverty and unemployment.

Malema warned voters there to refuse “jobs for sex” that ANC members allegedly offered them and instead vote for a party which would create jobs and give them land, the EFF.

The “Bay” has proved dicey for parties, with a hung council and only one councillor with a casting vote.

ALSO READ: Local Elections 2021: Voters must do the right thing

In the past five years, the mayorship has changed hands from the DA, to the United Democratic Movement (UDM), African Independent Congress (AIC) and back to the DA.

A single-member party, the Patriotic Alliance, became the kingmaker after the other smaller parties consistently sided with the DA and the ANC and EFF decided to stay away from the post.